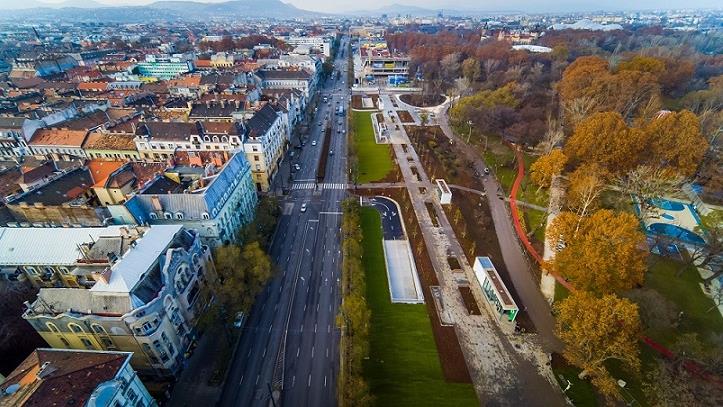 The parking lot has reached a milestone: thanks to the Budget Budapest project, the Underground Garage Museum is complete, offering Dosa Gergie eco-friendly parking to those arriving in the park and residents, said Laszlo Baan, Budapest Budget Project Ministerial Commissioner. The underground garage with a total of 800 seats and spacious parking spaces on three levels is completely without barriers, with electric chargers and family parking spaces.

According to the announcement of the “Budapest Budget” project, Laszlo Baan emphasized on the opening: it is the only feature in Europe that, reflecting the centuries-old connection between Varoslige and art, the underground garage Through Ilona Keseru, Dora Maurer and Imre Buck to Victor Vasarelli.

This created a unique and especially spectacular interior, which also helps with orientation. The above-ground part of the Museum’s underground garage has finally been returned to the City Park: a pleasant promenade with more than ten thousand square meters of new green space has been created on the site of the basalt-cubic area occupied by cars parked for decades, the minister said.

List of works of art on display in the Museum’s underground garage:

“One of the main goals of the Liget Budapest Varoslige Reconstruction Project is to radically reduce car traffic, which has been stifling the park for decades, in addition to rehabilitating and increasing the park’s green space, which is still a huge environmental burden for Liget,” said Laszlo Baan. . Car-free visitors to Varosliget, both adults and children, will be able to relax, play sports and play in a significantly quieter and better-publicized public park. As a first step towards achieving this goal, the possibility of surface parking on Fifty-six Square was eliminated, and the opening of the three-storey underground garage Museum, which can accommodate 800 cars, was a huge milestone.

During a state of emergency caused by a coronavirus epidemic, between 7 and 19 o’clock, anyone can park for free in the underground garage according to the relevant government decree.

In the underground garage without barriers, vehicles for the disabled were given a separate parking space, and drivers and those arriving by electric car were provided with places with a charger.

For cyclists, there is also an enclosed bicycle storage room with changing rooms and showers, which can be safely accessed by its own path, on the upper level of the garage.

The underground garage in the Museum is an ideal choice for athletes who come to the Sports Center “City Park” or the running circle, families who come to the “Playground”, visitors to Liget, but also for those who work in nearby offices and residents of neighboring areas. Residents of 6th, 7th and 14th Districts with a municipal waiting permit can park for up to 200 spaces free of charge between 5pm and 9am, with a one-time registration fee of HUF 2000, if they register on the website of the Budget Budapest project

A unique, spectacular feature of the underground garage throughout Europe is that its interiors are decorated with copies of selected works from the collection of the National Gallery, which not only enhance the visual experience, but also help in orientation. On the walls, the audience can see reproductions of geometric, non-figurative masterpieces by 12 outstanding Hungarian masters from the collection of the Museum of Fine Arts, the Hungarian National Gallery and the Vassareli Museum, making the new building a completely unique and worthy of cultural tradition. at Varoslige. highlighted by Laszlo Baan.

Spectacular video from the underground garage in the Museum:

In the above-ground part of the Museum’s underground garage – on the site of the former parking lot for basalt cubes – a new promenade was created, the Varosliget promenade, with central evening lighting and modern furniture combinations in its central resting place, said Benedek Gyorgjevic. director of Varosliget. . Thanks to the Liget project, the new building between the new building of the Ethnographic Museum and the City Park Theater, designed on the corner of the Dozza Gyrgi-Ittos Dürer line, created more than ten thousand square meters of new green space with more than 100 deciduous trees. , 4,000 shrubs and about 40,000 flowers. perennials were planted. At the edge of the elegant promenade and park, there is a living room of 600 m² with seating furniture.

However, the cancellation of the cars from Varoslige has not ended here yet – stressed the CEO of Varoslige Zrt. Thanks to the Liget Budapest Project, additional underground garages are planned to be built in the coming period, and with the transformation of the Kos Caroli promenade into a real promenade without traffic, Liget will become greener and a residential park – added Benedek orgorgjevic.