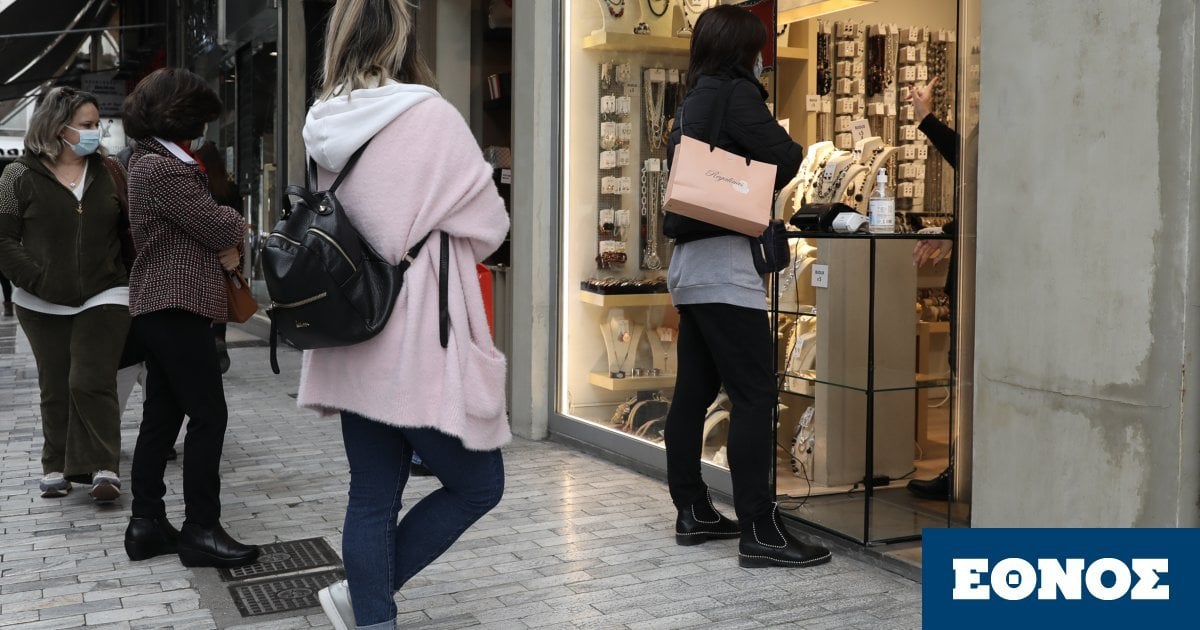 Discounts start next week. What will happen to the stores, what is expected for the restaurant and what new support measures are being prepared

From next Monday, January 11th their work begins again commercial stores by his method click, while at the same time The discounts will be premiered as – as everything shows – no extension of their start date will be given despite the relevant requests submitted.

Together The only businesses allowed to be physically present will reopen, but were closed this week with the toughest closure: bookstores, hairdressers, nail care services and florists.

One week later, on January 18th will start visiting customers in stores with a pre-arranged appointment, as already written by Ethnos.gr. On click in the store will come to replace him click provided, of course, that the committee of epidemiologists give the green light on the basis of the data collected so far.

Visiting meeting shops, although also a method whose effectiveness has not yet been measured, is the only salvation for thousands of small and medium-sized retailers who have failed to work with click because they lacked the basic technological infrastructure and for which the danger of the padlock is now visible.

It is characteristic that this year’s holiday turnover left at least one hole 2.2 billion euros because, according to his estimates Athens Chamber of Commerce, this year barely reached t1.3 billion when in the holiday season 2019 – 2020 it reached 3.5 billion euros.

At the same time, the turnover that occurred is estimated as a percentage 80% large retail companies that can fully support Internet and “semi-Internet” networks only 15,000 companies in a total of about 800,000 across the country have a fully organized and functional e-store.

What traders want to avoid is their accordion function. shops after opening – closing creates more problems than it solves with a typical example florists, who will be forced to throw away the goods they procured to remove this week during which they finally remained closed.

These issues, as well as ways to further strengthen small and medium enterprises were discussed at today’s meeting. the president of the Athens Chamber of Commerce, Yannis Chacitodosiou, and the Minister of Development, Adonis Georgia Georgiadis.

The main topic of discussion was the implementation of “cilck in the store“, Ie” delivery in the store “.

Mr. Hadjiteodosiu stressed to Mr. GeorgiaGhiadis that from the moment he returns from 01.11.2021 “click“, The need for urgent work and her click in the store, in order to support retail and not to be lost discount period, with the Minister of Development undertaking to implement it as soon as possible.

“We had an extremely fruitful cooperation with him Minister of Development, who knows both the problems of small and medium enterprises and the market situation. We consider it very important to start “click in the store“Always respecting the rules and health protocols, so that the thousands of small and medium-sized businesses that do not have the opportunity to work by ‘clicking away’, finally catch their breath. Especially now that the discounts are starting. Judging by the interest shown by the Minister, I believe In the future, it will be possible to make purchases with “in-store delivery” noted immediately after Mr Hacitodosio’s meeting.

With click in the store The consumer will be able to schedule appointments by phone or online for his visit to the store at a predetermined time, to choose a product that interests him there, to try it if he wants and to pay for it in the store. The obligation to send a message by appointment from the store will definitely apply so that the consumer can go there.

It will also be mandatory – as for everyone else movement – the mission sms on 13033, marked 2 in the case of procurement. Under existing distance control measures, each store can be up to 4 clients after 100 square meters, of course with the use of a protective mask, as in any other place.

And if retail can be reopened even with strict safeguards and rules, the same does not apply to the focus, the opening of which is not even visible on the horizon. When they can be reopened cafes, restaurants, bars, etc. remains unknown while many of them businesses it is estimated that they will not be able to survive. Saving companies and especially as many jobs as possible is also the reason why in Ministry of Development are already considering scenarios for one new support program strictly catering and with the main goal of keeping the jobs.

At the same time, the good news is return deposit 5 and 6 also – as stated in етнос.gr Mr. Hadjiteodosiu, here it is clear commitment of the ministry to seriously consider the reduction of 70% of the amount to be reimbursed by the users.

It seems that it will finally be possible to “give” 70% на return deposit 5, instead of 50% “donated” to return deposit 4. In any case, entrepreneurs request an extension of the submission date of the relevant applications so that it ends at the end of the month and not on the 15th, as planned.

In addition to Ministry of Development is already considering loans for 25,000 small and medium enterprises with a business guarantee of 20%, although the entrepreneurs themselves estimate that the specific measure will not “walk” because it will encounter obstacles from the banks that will ask for bigger guarantees.