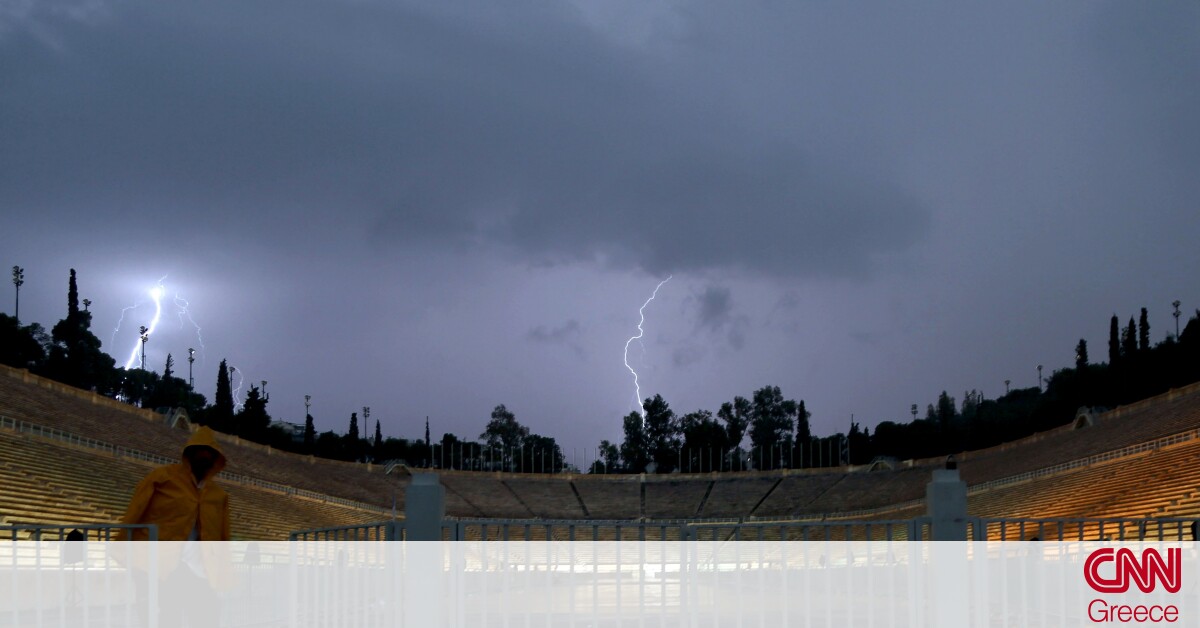 Catching from the west the barometer low which will cause bad weather Kirki in our country, with intense weather phenomena starting to appear in the next few hours.

The image below shows the location of the accompanying clouds, as recorded by the meteorological satellite in the infrared range, on Tuesday night at 27/10.

The areas that will be affected are, from late Tuesday night in the Ionian region, mainly the islands of Central and Southern Ionian and probably the southern parts of the Peloponnese, while from the first hours of Wednesday (28-10-20 National holiday) Peloponnese, Crete, gradually Central Greece (including Attica) and Evia.

From noon, strong phenomena will stretch on Thessaly, in Sporadically, in its southern parts Epirus and so on Cycles. Strong phenomena are expected in the Dodecanese and the islands of the north-eastern Aegean in the afternoon, while in Central and Eastern Macedonia and Thrace in the evening.

ATTICA
Weather: Increased cloudiness and rapid rain and sporadic thunderstorms in strong places that will be accompanied by hail. From the afternoon the weather will become unstable.
Winds: East from 3 to 4, gradually from 4 to 6 and temporarily from 7 Beaufort, which will turn southwest in the afternoon and will weaken.
Temperature: From 14 to 22 degrees Celsius.

THESSALONIKI
Weather: Cloudy skies temporarily increased with rain in the afternoon, while sporadic thunderstorms will occur in the evening mainly in the south which will be temporarily strong and will be accompanied by hail.
Winds: Variable patients, from noon to east from 3 to 4 beauforts that will become northwesterly with the same intensity during the night.
Temperature: From 09 to 20 degrees Celsius.

MACEDONIA, TRAKA
Weather: In western Macedonia the clouds temporarily increased with local rainfall. In the rest of the clouds temporarily increased and in the afternoon rains and sporadic thunderstorms which in the evening will be temporarily strong and will be accompanied by hail mainly in the south.
Winds: From east 3 to 4 and gradually to 5 Beaufort.
Temperature: From 08 to 21 degrees Celsius. In western Macedonia 3 to 4 points lower.

IONIAN ISLANDS, EPIRUS, WESTERN STEREA, WESTERN PELOPONNESE
Weather: Heavy rain and thunderstorms in places that will be accompanied by hail mainly on the islands of central and southern Ionian, western Steria, western Peloponnese and southern Epirus. Gradual weakening of the phenomena is expected from the afternoon and improvement during the night.
Winds: North-east from 4 to 6 beauforts and south from south-southeast from 5 to 7 beauforts. In the afternoon and from north will turn north northwest from 4 to 6 beauforts with weakening at night.
Temperature: From 14 to 22 degrees Celsius. In Epirus in places from 3 to 5 points lower.

SESALIA, EASTERN STEREA, EVIO, EASTERN PELOPONNESE
Weather: In the Peloponnese and Crete, fast in eastern Steria and Evia and from noon in Thessaly and Sporadia heavy rains and thunderstorms in places that will be accompanied by hail. From late at night, the effects will gradually weaken.
Winds: North from east 3 to 4 and gradually 4 to 6 Beaufort, which will turn north at night with a slight weakening. South south southeast 4 to 5, fast 5 to 7 beauforts turning from noon to southwest with weakening at night
Temperature: From 11 to 23 degrees Celsius. In the north the minimum is less than 2 to 3 degrees.

CYCLADES, CRETE
Weather: Cloudy with rain and thunderstorms in places that will be accompanied by hail initially in Crete and by noon in the Cyclades. From late at night, the effects will gradually weaken.
Winds: South southeast 3 to 5, fast 5 to 7, turning from noon to southwest 4 to 6 Beaufort.
Temperature: From 17 to 23 degrees Celsius.

EASTERN AEGEAN ISLANDS, DODECANESE
Weather: Several clouds that will increase rapidly and from noon there will be rain and sporadic thunderstorms. From the afternoon the effects will be strong and will be accompanied by hail.
Winds: Southeast 3 to 4 amplification at noon to 4 to 6 and in the south temporary 7 Beaufort turning at night to the southwest with slight weakening.
Temperature: From 20 to 25 degrees Celsius. North 2 to 3 degrees lower.

Extraordinary announcement for the upcoming dangerous time phenomenon from bad weather conditions ”Kirki“Issued by the Secretary General of Civil Protection, B. Papageorgiou.

As mentioned in the relevant announcement: Following the relevant forecasts for dangerous weather events from late tonight (Tuesday 27-10-20) that will occur mainly on Wednesday (28-10-20 day of the National Holiday) in many parts of the country, with the main characteristics of heavy rains and storms in places that will be accompanied by hail and strong winds, citizens are urged to be very careful and yes faithfully follow these basic guidelines:

The General Secretariat for Civil Protection, with all its services, is on standby, while informing the involved competent state services, as well as the regions and municipalities in the country, to be on increased alert for civil protection, in order to deal immediately. the effects of hard times.

Citizens are invited to follow the relevant media reports and follow the instructions of the competent authorities.

Citizens can be informed every day about the development of exceptional weather events in the regular EMI weather forecast reports and on the EMI website at www.hnms.gr.

For information and announcements for the prevailing condition and passability of the road network due to the influx of flood waters in it, citizens can visit the website of EL.AS. www.astynomia.gr.