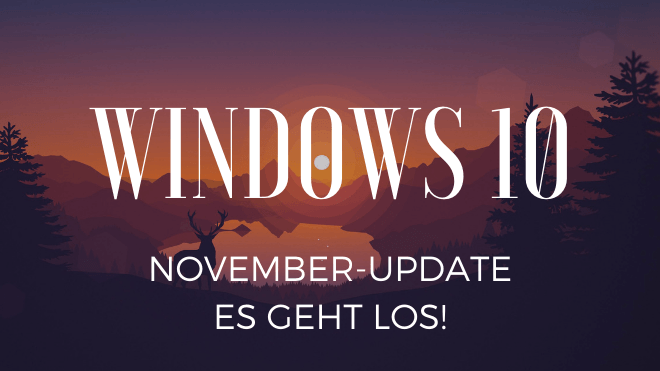 Updating the version with Windows 10, 1909 aka "Update Updates" is now available. Unlike previous feature updates, software known as code 19H2 comes with only a few new features. These can be considered on one hand.

The background is that Microsoft primarily worked on improvements, performance improvements, and bug fixes for the new release of Windows 10. There are only a few innovations and noticeable changes. 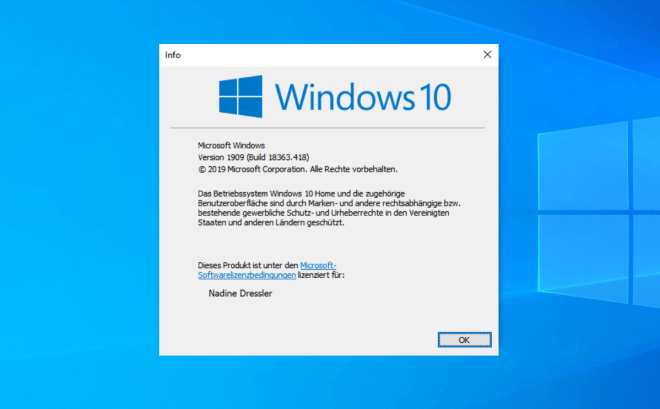 It is the second update to this feature this year and the eighth since the launch of Windows 10. The download was announced this time as a cumulative update and is numbered 18363,418. This means that all users who are already using the Windows 10 May Update 1903 update will simply get the new version as a regular Windows update. However, it will still be marked as "feature update".

Bypasses such as updates via the media creation tool are probably unnecessary after Microsoft's first announcements – but they are certainly still possible. Because the November update should be available shortly for any Windows 10 user.

"Update Windows 10 November 2019", or version 1909, can be downloaded and installed either as an ISO file or via the Windows Update built-in feature. Alternatively, the media creation tool can be used by Microsoft.
We present the three options in detail below.

1. Reinstall and update via ISO files

With the official ISO files, Windows 10 version 1909 can be easily downloaded. You can also update your Windows 10 system (update) and perform a complete clean install. We offer the latest Windows 10 ISO files through our download center. Installation requires a USB stick with at least eight gigabytes of storage. This can be set up using the Windows USB and DVD download tool as a bootable media.

A clear guide on how to do this and what steps are necessary afterwards can be found in our step-by-step instructions: "How do I install Windows from a USB stick?".

2. Update via the Windows Update feature

The Windows Update can also be obtained and installed through the integrated Windows Update feature. To do this, go to settings > Update and security > Update Windows and click "Check for Updates".

However, as Microsoft is gradually rolling out major updates, the latest version may still be unavailable. In this case, download the ISO files or the (subsequent) media creation tool.

With the Microsoft Media Creation tool, you can download Windows 10 May 2019 update installation files directly from Microsoft. Once you get started, first select the desired edition (Home, Professional) and language. Then you can either start the installation directly or create an installation media (USB stick). The setup dialog will guide you through all the necessary steps.

While the Windows 10 May 2019 update focused on better usability, the November 2019 update is in preparation for the forthcoming release, currently under development as 20H1. Many new features do not exist in the 1909 version. However, we have considered the most important.

Alexa, Cortana and Co. On the lock screen

Among the innovations is that Amazon is now working more closely with Microsoft – Alexa's digital voice assistant is now providing voice commands or voice activation on the lock screen as well. So, now you can ask Alexa questions, if the computer is locked. This requires an Amazon Alexa application for Windows 10. By the way, posting the feature via the lock screen should apply to all third-party providers of language assistants.

Similar to Cortana itself, the user must confirm in the settings that the speech assistant should also be usable before Sperrbilschirm. 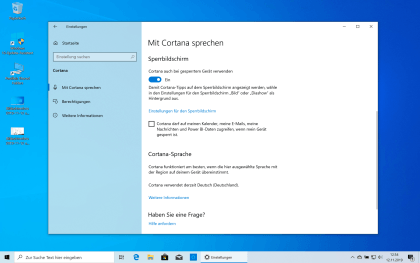 Setting up a Cortana lock screen 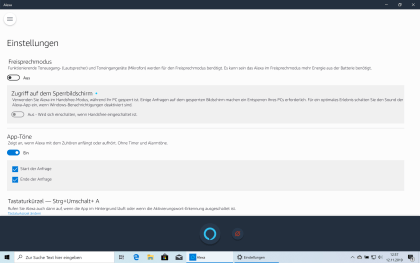 When you launch the Alexa app after the update, Amazon requires a release. Alexa can only be used on the lock screen when both Indie Shows or Indone Shows mode is activated. The required settings can be found in the application itself.

Create calendar events in the taskbar

As a simplification of scheduling entries, appointments can now be easily created directly in the taskbar.

To do this, go to the taskbar and click the Time and Date symbol. The calendar view then opens. One chooses the date for his new entry and can make all the extra entries needed directly.

The file explorer was complemented by the integration of the Windows browser. Thus, searches from Explorer can produce the same good results as searching through the right search bar in the taskbar. Indexed results now include OneDrive content.

New in the home menu is an automatic extension that adjusts the width or size of the home menu display if needed, so that the descriptions of the icons displayed in the menu also fit in the window.

The notification settings page has been enhanced with images showing how notifications can be viewed in banner mode and the Infocenter. The settings themselves are slightly revised. 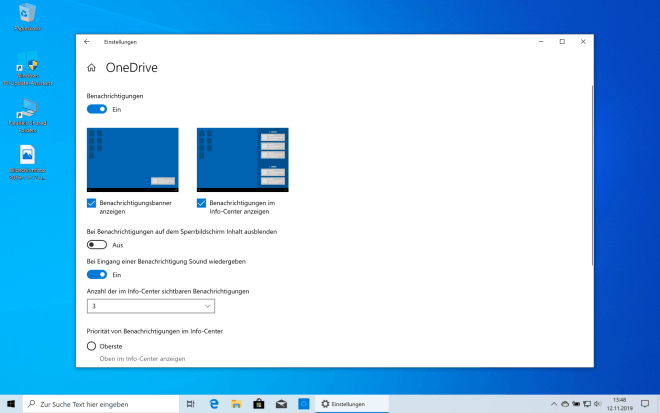 According to Microsoft, Windows 10 version 1909 offers improved power efficiency for computers with certain processors. What is the name of the group, but not yet. This also applies to performance enhancements with respect to certain processors. Tasks are now more efficiently divided into CPU preference cores. The new policy guarantees that intensive process or critical tasks are sent to free and faster cores.

System requirements remain identical to those of previous versions. Microsoft has also added support for the newly released Intel and AMD processors.