Home / france / The ministry of higher education is targeted by protesters

The ministry of higher education is targeted by protesters 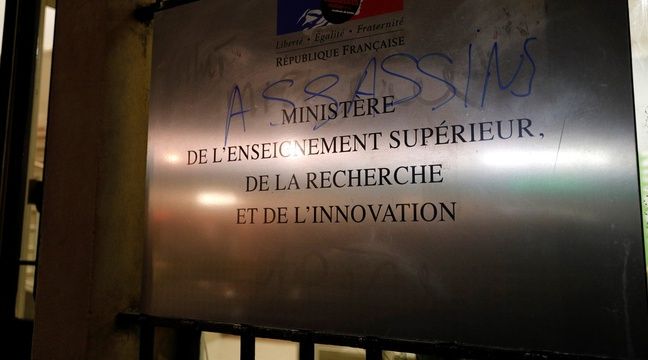 Humirne returned to Paris. The gate of the Ministry of Higher Education was downgraded on Tuesday night by some protesters from a rally of students in front of Kruse to protest the insecurity behind a student shelter in Lyon, police sources have learned.

Hundreds of students gathered quietly the night before Crous de Paris, when the demonstration "turned into a wild procession in the Latin Quarter," according to police. The protesters then went to the Ministry of Higher Education, less than 2km and "degraded" the gate, according to the same source, adding that calm had returned "after police intervention".

Part of the front door of the ministry was forced and dismantled, replaced in the evenings with a metal fence, and the inscription "Heaven Kills" was printed on the wall of the ministry. AFP. "One of the doors has been broken, leading to a brief intrusion," the higher education ministry confirmed in a statement released in the evening.

Several rallies of hundreds of angry students, called by Solidaires' union, took place on Tuesday in several cities in France, including Lyon, where a 22-year-old student was mutilated on Friday in front of a university restaurant, and is always between life and death in the hospital. In financial trouble – he lost his "triple" second year scholarship to the University of Lyon 2 – the young man explained his gesture in a message read on Tuesday. "Today I'm going to do the irreparable, if the whole building of Krus does not happen by accident, I aim for a political place," the student said before leaving for work.

The Francois Hollande conference has been canceled

In Lille, former President François Hollande was prevented from holding a university conference by protesters who condemned student insecurity. The former president was not in the amphitheater when hundreds of people attacked him, chanting "Lyon, Lyon, neither forgetting nor forgiving", "Dutch murderer!" "," Uncertainty kills, all responsible ".

Higher Education Minister Frederick Vidal condemned "firmly" in the ministry's statement "the violence and degradation that took place on the sidelines of rallies" during the day. "Calls for violence and threats of the deaths of Krus leaders multiplying throughout the day are unacceptable," she said. It was also considered "unthinkable that the arrival of a former President of the Republic could be prevented within the university space by the violent action of several".