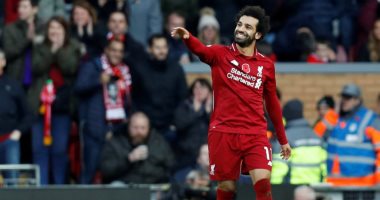 The referee of the Liverpool match, which includes the Egyptian player Mohamed Salah and Fulham, who is currently at Anfield, in the 12th round of the Premier League Premier League canceled the goal for Fulham.

Just 14 seconds after Fulham's goal, Mohamed Salah was able to score Liverpool's only goal in the first half, ending up in the Reds' slow lead.

Mohammed Salah is aiming to lead Liverpool to restore tons of victories in today's match, after Liverpool drew 1-1 with Arsenal in the match played in the last round at the Emirates Stadium, and an unexpected defeat with Serbian Red Star 2: 0 in rivalry of the fourth round of the group stage in the Champions League competition.

Liverpool are third in the Premiership with 27 points behind Manchester City and two points behind Chelsea, and Fulham is in fifth place with five points ahead of the tournament.