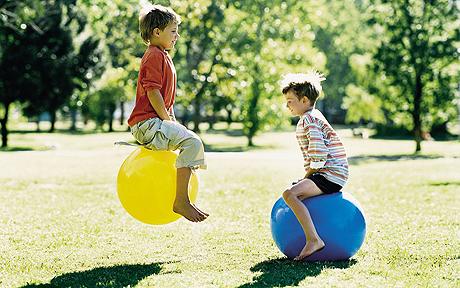 Events of the day – Experts say that children playing abroad are beneficial to their eyes because they reduce the risk of myopia.

While many of them have a tendency to blame their genes for this problem, genetics alone can not explain this rapidly changing problem.

There are many studies suggesting that having fun in the fresh air can reduce the risk of a child with myopia.

Outside presence not only forces you to look further, but it is also believed that exposure to outdoor lighting is essential because it seems to slow down the central growth of the eye, because excessive growth contributes to myopia.

One study found that if the child did not spend enough time outdoors, when the parents were short-sighted, the genetic risk increased to about 60 percent.

In the light of these events, experts now believe that the environment plays a greater role in myopia than genes.

In 1991, the study of twins, born in 1994-1996 in Great Britain, contained data from research on the early development of twins.

During the first 16 years of life, the experts analyzed the development, behavior and education of each child using questionnaires and tests, and also collected eye tests.

Interestingly, the study identified four major environmental factors associated with myopia, some of which were unexpected.

The study found that infants born after the mother receiving infertility treatment were 25 to 30 percent less likely to develop myopia in adolescents.

"This may be partly due to the fact that infants born after infertility treatment tend to have lower birth weight and shorter pregnancies, and according to some studies, not all of them delay development and reduce cognitive performance," the experts said. Decreased cognitive grades seem to reduce myopia.

The study also showed that people born in the summer more often had myopia, probably because they started going to school less than many peers.

This may be related to the relationship between intelligence and myopia, although social factors such as class and wealth can also play a role.

Technology is undoubtedly responsible for the presence of myopia, but for another reason than was thought the main reason why technology is the cause of myopia is not directly harmful to the eyes (it is harmful), but because it absorbs the time of children that can be used for fun and traffic abroad.

Experts say: "Increasing the watch time of electronic devices, resulting from the use of games and social networks and digital entertainment, has led to an increase in stable behavior, lack of nutrition and inactivity in the open air."

But experts say that these environmental factors are associated only with myopia. As such, they do not necessarily cause a shortage.

But another part of the research may be worse. The study was conducted on children born in the 90s, before the era of smartphones and other handheld devices.

Currently, when our eyes are attached to the screen, regardless of where we are, even if it is outside, it can greatly worsen the situation.