Babis ate with Zeeman. The President confirmed that he would appoint him again 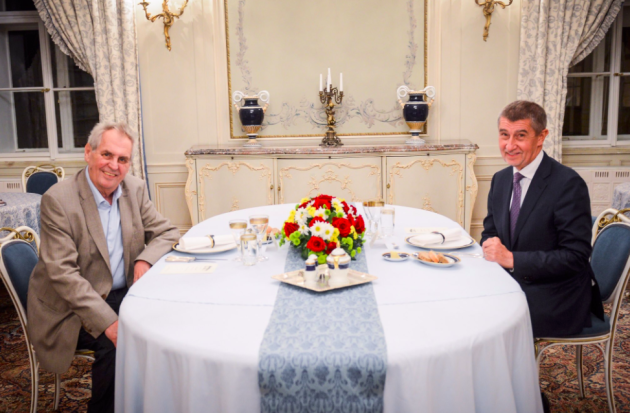 Prime Minister Andrej Babis visited the president of Milos Zeman on Monday afternoon in the castle Lani. It was a regular meeting with the events of the last few days on the agenda. That is, the situation around the nest of Hat and also the kidnapping of the son of Babys in Crimea. Earlier, the president said Babys had the support.

The meeting took place for the first time since the case was flooded. But the president said earlier that there was no reason for the prime minister to resign.

According to Babis, politicians spoke about a visit to Paris, where Babis met with writer Milan Kundera. He informed him about the Libyan conference in Palermo and the upcoming visit to Zeman in Israel. "Then we talked about families, children and trust in the government," Babis added.

"If the government and the government were to resign, the president (the president) would order me from the government, but he personally does not expect the government to fall because that's not the least cause," Babis said, confirming Zeeman's previous statement. "Some people do not accept that they simply lost in the election and want to change it by other means," he added.

Also, his son is mentioned. Babys, in his words, is sorry that the media talk about his son, who is ill. "Leave it to the Czech Republic's acting police, which is investigating," the prime minister added.

Due to the case, the Speaker of the Chamber of Deputies Radek Vondrachek (ANO) called a special parliamentary meeting where the government of the movement of the PP and the CSCE will vote in distrust. This is set for Friday, November 23rd. The meeting was prompted by members of six opposition parties for the latest information in the prime minister's hatred case and Prime Minister Yanukovych's Andrew Babysh and the alleged kidnapping of his son in the Ukrainian Crimea annexed by Russia.

CSSD president Hamac canceled a ministerial trip to London due to negotiations in Prague. "The situation is serious, but I do not want to be able to travel abroad at this time, but we have to deal with the situation at home," Hamacek said. The British side, according to Hamak, learned about the program's change already on Sunday and understands the situation.

Even after Saturday demonstrations, Babys has no intention of resigning. If the Chamber of Deputies expresses his distrust, he will accept the offer of the President for the formation of another Cabinet. He denied that he would take his son abroad because of the "Sting Nest" case, in which both of them were indicted. On TV Nova on Sunday said his son is still convinced that he has inadvertently gone to Russia and Ukraine,

The current political crisis began on Monday after broadcasting secretly recorded reports with Babys Jr.. He accused his father's colleagues of holding him in the case of the Cheppy Nest in Crimea, Ukraine, affiliated with Russia.

The prime minister, according to his son, wanted to leave the Czech Republic over the Hapka case for the hat, in which both are facing charges of fraudulent subsidies. Babis refused, his son suffers from schizophrenia, should be treated and monitored. Younger Babis, in response, accused his father of a lie. The prime minister then left for Switzerland at his weekend son, where he lives with his mother.