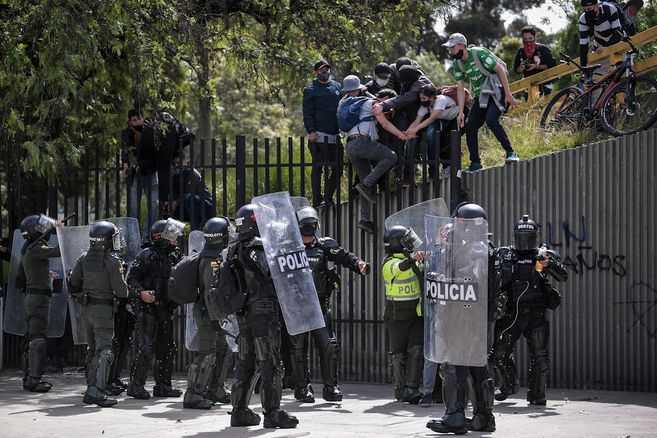 This is how # 21H progresses in the capital

Clashes broke out between university students and Esmad agents after a group of hooded men vandalized a police car and a motorcycle. The demonstrations are expected to continue until the end of the day.

Around 15:00 this Saturday, peaceful demonstrations were marked by clashes between protesters and members of the public forces at the headquarters of the National University, which is closed. This was not an obstacle for students to enter the premises of the institution, bypassing the bars around it. Following this, Esmad’s agents attacked the protest.

Despite the fact that the first hours of this second day of marches in Bogota passed peacefully, in the afternoon the main characters were riots and clashes between protesters and public forces. Accidents that even caused damage to the road, as they caused a car accident in the vicinity of the National University.

The demonstration was accompanied by coexistence managers of the Bogota Government Secretariat, who tried to prevent vandalism. Fortunately, no serious injuries have been reported so far, although several protesters were hit by tear gas fired by Esmad inside and outside the institution.

According to a report by the Ministry of Mobility, another demonstration was presented at the Monument to the Heroes that reached the National Park. The protest is affecting Carrera Septima, a north-south direction. Within an hour, the Aguas and Museo del Oro stations had ceased operations, however, they had already resumed operations at both points.

Transmilenio buses, stations and banking entities were also affected. The protests are expected to continue until the end of the day.