After the publication of El Dinamo's report, which published various discriminatory situations in the school San Francisco de Quito Independence, among them, the refusal of students of the third grade to read the book Pedro Lemebel, a debate about the content seen in the classroom was opened.

Along with this, controversy generated specific effects in municipal institutions.

As soon as the students refuse to read "The corner is my heart", to consider the author "disgusting" with regard to his sexual orientation – a decision that was supported by the school board and promoted by some lawyers – the affiliate professor asked for a psychiatric medical permit of two months, submitted by the Institute for Labor Safety (IST).

The school of independence where students refused to read Pedro Lemebel

After the end of that interruption, the teacher was transferred to complete his school year at the President of Liceo Jose Manuel Balmeseda in the same municipality.

Time later, On December 31, 2018, the director of this institution, Omar Bakedano, handed over the letter to dismiss the teacher by language, a document signed by the head of the Administrative Department for Municipal Education (Daim), Claudia Carrilo.

The said office claims that the reasons for the dismissal are "Deadline for the period for which the contract was concluded (Article 72, letter d, Statute of instruction)". The professor was hired as a contractor for 22 hours Ordinary Grant and 8 for Special Preferential Subsidies (SEP). 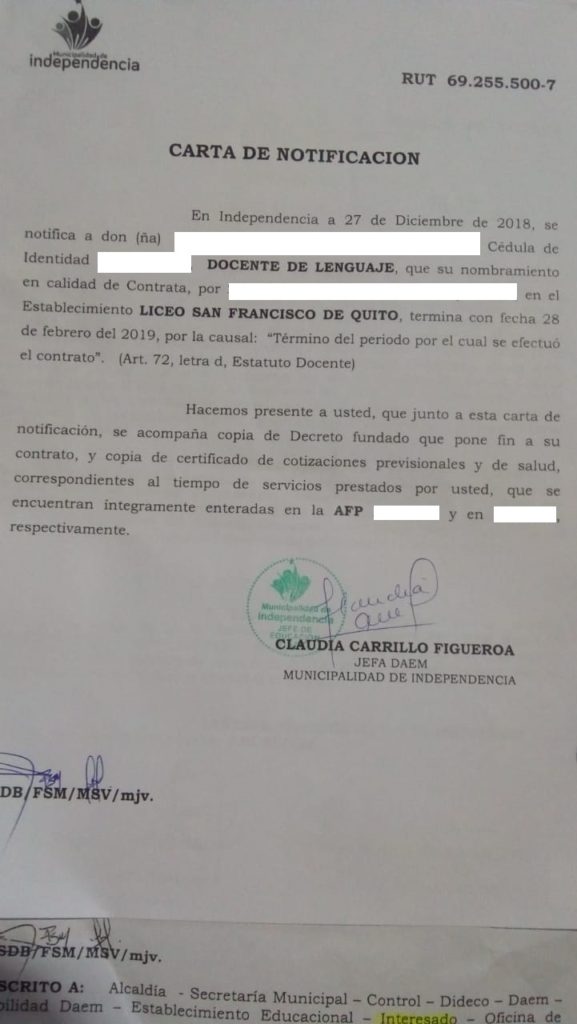 Together with this notification letter, the professor received a decree for a mayor who based his dismissal.

It includes one of the arguments for dismissing the "reorganization of an educational administrative entity in accordance." to the report on the work of the teacher prepared by the director of the institution, based on the fact that the teacher is not articulated with the values ​​of the Institutional Education Project (PEI) and in accordance with the Annual Plan for the Development of Municipal Education (PADEM) ".

In this document, signed by the Deputy Mayor, Louis Mayor Baronti, it is also mentioned that the term of contractual relations is from February 28, 2019

"They brought me out of the commune as a measure of repression against me. This was my third year in the municipality of Independence and my pedagogical work was never questioned in evaluations and was wrong ", assures the teacher Dynamo, also reminding that it considers it to be an "unfair" measure.

He added that he was very welcome when he arrived at the high school "Balmedex" and that he talked with other school principals in the municipality, which was paralyzed by the dismissal of the supporter.

Consulted by this situation, by Municipality of Independence they dismissed that the teacher's dismissal was related to the conflict in the book of Lemebel.

"The professor, who worked as a contractor (a fixed deadline of February 28), declared his decision not to proceed to San Francisco Liceo in Quito. When checking the availability of classes, language and communication were not available and therefore the agreement was not renewed "said Claudia Carigno.

Another teacher is turned off

After learning about the rejection of the Lemebel's book by students, the PIP teacher (School Integration Program) decided to address the implications of the conflict that appeared in the school.

The teacher says that Grade Four students have raised many questions about sexuality and homosexual couples.

Prior to that, he conducted an activity in which he asked his students to do what is tolerance and freedom of expression for them. One of those pictures taken by the students was that two men kissed each other.

According to their version, the Teacher's Technical Unit (UTR) at the school reprimanded the teacher (who asked for a reservation on her name), claiming she was a representative of the school and that "you could not talk about homosexuality at school". which confirmed his lack of criteria. Again, the assertions of the lawyers regarding these contents, which were considered inadequate for students in the fourth grade, were re-added.

In this connection, he said Dynamo she was notified last week of her dissolution. "The director told me that it was for performance and when I asked him how my performance was, he could not answer anything technical. In fact, my coordinator for the integration program was not even asked about my evaluation. Then, faced with this situation, I conclude that my dismissal is because of my thinking, because I have made it clear that this is a sexist, sexist school, and that also affects my scalability here ", he says.

The teacher spent one year and five months in high school and, according to her experience, the reasons for the dismissals are related to criteria other than PEI. "The question of sexuality, identity and gender is not a major issue in this establishment and it will not change until the same managers are there", the teacher concludes. 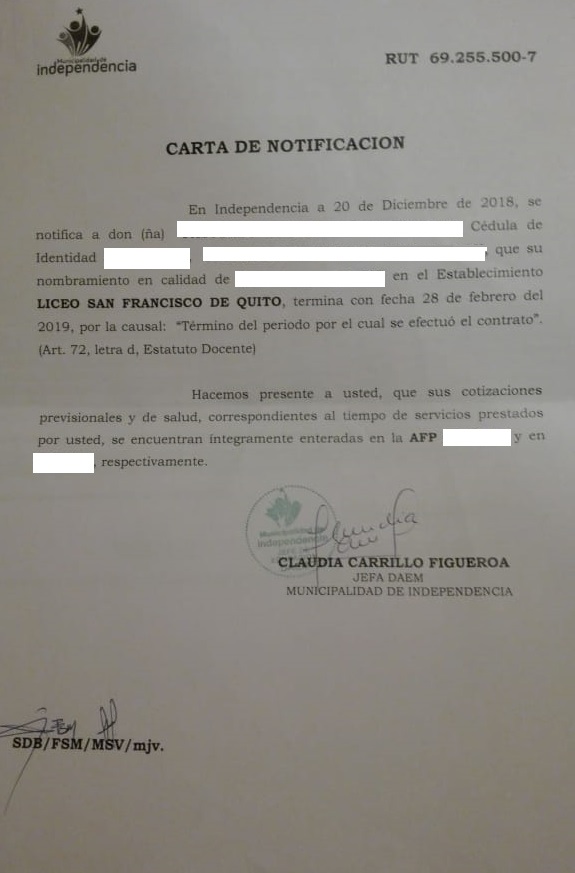