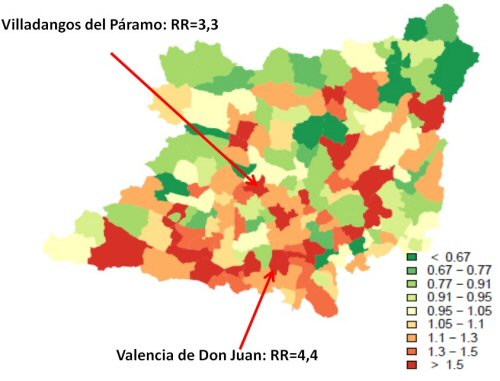 Tobacco-related tumors have increased significantly in recent decades in the Health Area of ​​León (Spain). A study that covers from 1997 to 2014 and includes 7,103 cases reveals that this increase is particularly noticeable in women. Figures are similar to those of the rest of the Spanish population and signify the importance of this risk factor that can be avoided.

"75% of the analyzed tumors respond to lung cancer and bladder cancer, but there are many more, such as lip, tongue, tongue, mouth, oropharynx, nasopharynx, hypopharynx, nostrils and larynx, among others," explains Dikit Lydia Garcia Martinez, from the Research Group on the Gene Environment and Health Interactions, at the Institute of Biomedicine (IBIOMED) at the University of León.

The increase in the total number of cases each year is very marked, from just over 300 in 1997 to around 500 in 2014, according to data published in the Medicina de Familia magazine by the Spanish Association for Doctoral Practitioners (SEMERGEN). "We estimate that 59 percent can be directly attributed to snuff, with about 170 deaths every year in the health care unit of Leon," the expert said.

Among the most striking data from the study is the high increase in women, from about 30 cases in 1997 to about 80 in 2014. "Mainly, this is due to the increase in the prevalence of women smokers initiated in the previous decades and is maintained in the present," warns Lydia Garcia.

In the province there are some geographical differences that are determined by the habit of smoking. Therefore, the analysis includes the concept of "relative risks", ie the more likely a person will suffer from cancer (in this case, tobacco-related) in a particular municipality. In this case, the study shows that in Villadangos del Páramo and in Valencia de Don Juan, the likelihood of suffering the analyzed tumors is three and four times higher, respectively, than the average for the Leon Health Area.

Map of the relative risks of the municipalities in the Health Area León. (Image: U. de Leon / CIBERESP / DICYT)

"The discovery of geographical differences shows the need to apply preventive strategies adapted to local situations, which help reduce the incidence of smokers and avoid the involvement of young people," he says.

In that sense, all data from this research can be useful in terms of prevention. Overall, "the message we want to publish is very clear, tobacco kills more than seven million people worldwide every year, deaths that could be avoided by not consuming it," says the IBIOMED researcher.

For this, "it is first to know that we are dealing with a public health problem that can be avoided, reducing the number of new smokers by increasing the price of tobacco and preventing its availability and helping smokers to give up."

The numbers enrolled in Leon are consistent with those of all of Spain, contributed by other authors, especially with regard to the incidence of lung and bladder cancer, which has clearly increased in both sexes in recent years. However, in this area of ​​health there are some peculiarities. For example, rates of laryngeal cancer in women are among the highest in Spain, about one case per 100,000 inhabitants. In the case of men, they represent rates from 14.6 to 100.000, a value similar to other communities.

"This heterogeneous distribution of tumors has not been observed in our area, as previous studies of lung cancer and bladder do not receive the marked geographical difference that occurs when all tumors associated with tobacco are involved," the expert said.

The same team had previously studied the major tumors registered in Leon: colon cancer, stomach, chest, prostate and bladder. From now on, in the next research work they could continue the study period of many of them or continue to study other relevant tumors. (Source: Jose Picell Andres / DICIT)