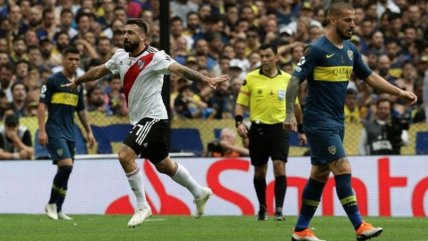 17:34| The paper cup? The incredible comparison made by ESPN with the plot of the "La casa de papel" series with what happened in the Copa Libertadores final

The novel who caught the whole country. They planned an unprecedented robbery, worked in silence, using dictatorial maneuvers. Loot? Final of Copa Libertadores. Everyone wanted to participate, but at the end it was Madrid. pic.twitter.com/2afLqokocz

Spain is ready to organize the final of the #CopaLibertadores between @BocaJrsOficial and @CARPoficial. FCSE and the services involved, with many years of experience in devices of this type, are already working on the necessary deployment to ensure the security of the event.

16:48| He will play the final in order not to be sanctioned (fine or expulsion of Connembol's matches), but he will still go to TAS

16:44| According to the Argentine press, Boca knows that the decision of the Disciplinary Tribunal is negative and will play the final. But that will not leave the legal path

16:26| Almost confirmed, according to Argentine media

16:24| If it is played in Madrid, "Bernabeu" will be the only stadium in history that will host the most important finals in football, as explained by the statistician Mr. Chip

The Final Copa Libertadores% u2705

16:20| Argentine media claim that the site of the Copa Libertadores final is almost defined. It will be at the stadium "Santiago Bernabeu" in Madrid