Yuzuru Hanyu not at its best, but the zloty at the Russian Grand Prix 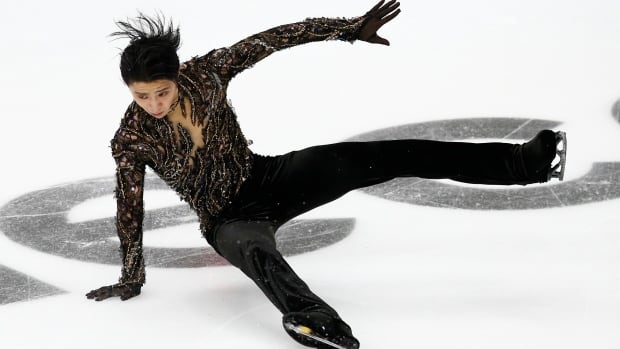 Yuzuru Hanyu from Japan won the gold at the Russian Grand Prix on Saturday in Moscow, thanks to the free skateboard away from its usual liquidity, but far ahead of all others.

Hanyu, Olympic gold medalist, took off strongly on Saturday with two clean quads, but he left the second pass on the quad-toe loop, and then he fell on the triple and selected an axel.

The 23-year-old scored the dominant appearance in the Russian Grand Prix, winning the men's title with a 30-point pillow over the remaining players. 9:29

With his ankle wrapped in a bandage, Hanyu limped out at a press conference and said he worsened his ankle injury during morning practice.

He considered giving up, he said, but "I really like skating, I really wanted to go on this program."

The damage leaves him uncertain about whether he will compete with the Japanese or the Grand Finale in December, Hanyu said.

The total sum of points in his free program at 167.89 was over 20 points compared to its season, but it was almost 10 points in relation to Georgia Morisi Kvitelashvili, who landed on three clean quads.

"I really managed to do everything I planned," said Kvitelashvili. "Not everything went smoothly."

I really had to fight for everything.– Canadian Keegan Messing on Saturday free skate

Keegan Messing, a lonely Canadian rival in Moscow, finished fifth with a total score of 220.75.

Messing was seventh after the Friday short program and he produced the sixth best free skate. Interpreting his routine of Charlie Chaplin, Messing opened an excellent threefold Lutz, but was not smooth during most of the other jumps falling on both fingers and landing smoothly on one of his two triple Axels.

"I really had to fight for everything," said Messing, a silver medalist earlier this month in Skate Canada. "I can get out of here, knowing that I gave it a solid fight."

The Canadian published a total score of 220.75, finishing fifth in the general classification of the Russian Grand Prix. 7:19

See more shares from the Russian Grand Prix The road to the Olympic Games on Saturday from 15:00 ET (CBC, CBCSports.ca).