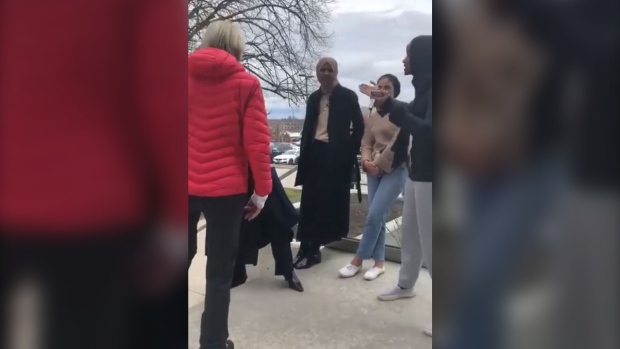 A university in Ontario condemned the incident on a campus where a woman told a group of young Muslim Canadian women that their chimneys and black headscarves did not make them "look Canadian".

In the footage posted on Facebook, a white woman in pink sour cream describes what she says is a standard look for young Canadian women: "torn jeans, t-shirt jackets and liquid shoes. And they do not wear scarves and do not wear black."

A group of six Muslim friends stood in front of the University Library Wilfried Lorier in Waterloo, Ontario, when a woman in the video stopped seeing them "like zoological animals," wrote Shama Saleh at the Facebook Post.

"This has happened to us, because the birth and the cultivation in Canada is not enough for people who look like us," Saleh wrote. "It seems that we all do is to try to humanize the unknown people who have already thought up before the conversation begins."

The university issued a statement Wednesday condemning women's words and offering support to anyone in the affected school community. "This incident is incompatible with the values ​​of equality, diversity and inclusion that we strive to nurture in Laurier," the statement said. The school added that no one was involved as a current student or a staff member at the university. Saleh on Facebook wrote that the group attended a focus group focus group to strengthen women through a Muslim way and a lifestyle magazine called Muse Avenue.

In one of the clips, the woman says that her concern is not with the color of the female skin or by applying a dress code. "I have many friends who are from different countries who were born here. I worked with them, they are part of my family. I do not put color on that," said the woman. "We just want everyone to come here and love our country as we like and assimilate."

The incident is not a "one-off situation," Saleh added on Facebook.

"To understand that our realities are called n-word, chanted in, called dirty animals, which need to be returned to our countries," she writes. "We need these safe spaces where our existence is not called into question."

Lorier emphasizes his firm support for diversity and inclusiveness after the incident on our Waterloo campus. The university has helped young women directly influence to offer support. For others interested in support, the resources are listed here: https://t.co/qv0xj6qKvG