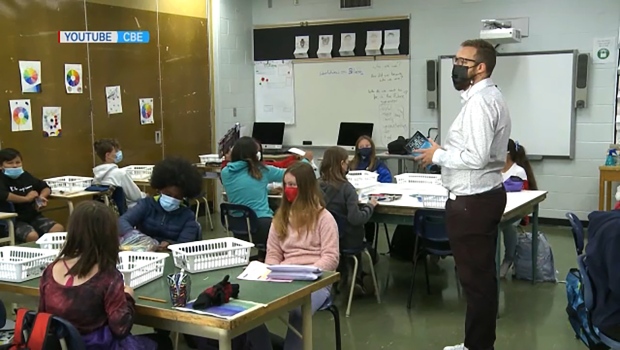 CALGARI – Thousands of Calgary students and school staff are forced to isolate themselves, leaving at least one school concerned about the negative impact on learning.

At least two high schools in the Catholic school district, Bishop McNally and St. Francis, have hundreds in self-isolation. Francis asks parents to talk to their children about preventing possible exposure to the virus while hanging out outside of school.

The public school board says about 2,400 staff and students are now in self-isolation after having close contact with an infected person at school.

The Catholic district says about 2,700 students and staff are in isolation.

In combination, St. Francis and Bishop McNally High Schools make up over 900 of those in quarantine, or one-third of the Catholic area.

According to the state, 13 schools in Calgary are currently experiencing epidemics, meaning two to four cases.

Another 11 schools are on guard status, meaning five or more infections.

In a letter sent to parents yesterday, St. Francis officials said that with hundreds of quarantines, it was having a negative impact on the school community, disrupting its basic focus on educating students at the school.

The letter cites social gatherings outside the school as a source of recent KOVID-19 cases.

He urged parents to emphasize to their children the need for physical distance, to avoid large gatherings, sharing food and drinks, especially as Halloween approaches.

That took home the province’s top doctor, Dr. Dina Hinshaw, on Monday, who said social gatherings must be limited to a maximum of 15 people.

The Catholic school district said 90 percent of the substitute teacher list was open every day, adding that some schools could be forced to relocate online if they stretched much less.

Last week, the CBE acknowledged that there were challenges in getting substitute teachers involved because of the virus.

With files from Camilla di useusepe