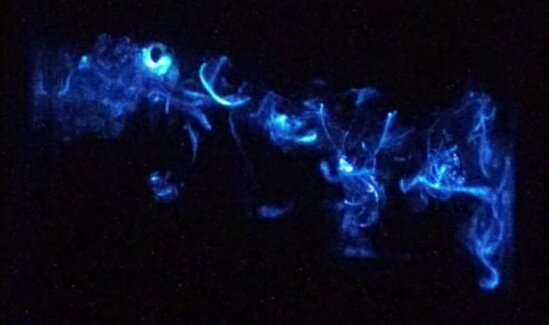 Evolution is a rich and dynamic process. Species react to pressures in various ways, most of which are reduced to finding food, avoiding becoming someone's food, and attracting a friend. To solve this last, the animal kingdom is filled with fantastic, bizarre and mesmerizing settings. Bioluminescent fluttering of ostracods can encapsulate all three.

Ostracodes are strange animals. Not bigger than sesame seeds, these crabs have a shell like a shell and often have no gills. Like many other sea creatures, a number of ostracods take advantage of bioluminescence to avoid prejudice and attract friends. It's the latest use that has attracted the attention of UC Santa Barbara's Nicholas Hensley's UC in his quest for a better understanding of the interaction between biochemistry and evolutionary change.

To create their superb light displays, the cysteid ostracodes throw out a little mucus injected with an enzyme and a reactant, and then swim from the glittering orbit to repeat the action again. The result is a trace of fading ellipses, or will-o-the-bruises hanging in the water column. And the length of each of these impulses is the main component of the display. Some are as quick as an old-fashioned lamp, Hensley said, while others stay in the water.

In the classic scenario, you would expect to find a clear correlation between how long the flash and the structure of the enzyme are responsible for, Hensley said. "And that's true of some of the species, but that's not true for all sorts."

Instead, Hensley and his colleagues discovered that two mechanisms influence the duration of light impulses. Animals using slow-enzymatic enzymes will produce a longer glow, but also one that spits a larger amount of reactant, which takes the enzymes longer for exhaust gases. Both are in play in different combinations across different types.

"It was one of the surprising results we received from our work," said Hensley. The team's findings appear in the Royal Society's diary Proceedings of papers B.

This discovery is due in part to the group of animals Hensley decided to study. Because ostracods spit their light, Hensley can study chemistry separately from the behavior of the animal itself. In contrast, the fireflies in which the reaction occurs in their bodies. As a result, it is under the control of animal behavior all the time, explained Todd Oakley, a professor at the Department of Ecology, Evolution and Marine Biology at UC Santa Barbara and adviser and co-author of Hensley. "We can get more in terms of the specifics of chemistry because it's out of the body," he said.

The relationship between the two mechanisms may even affect how different species will develop in the future. For example, if one species strives for constant pulsations, they may appear against the maximum of what the enzyme is capable of. Without the ability to make the enzyme more efficient, this kind can be developed to use more chemicals for the pulse to achieve a longer flash.

Hensley is currently investigating how certain changes in the enzyme affect her ability to produce light: to work faster, slower, or not at all. He also hopes to reconstruct the group's enzyme enzyme and will test his functions to see how this may differ from those used by animals today.

At the same time, the team looks around to the camera's behavior in coping with ostracods. For example, they would like to determine how much pulse length is important for female ostracodes, compared with aspects such as distance or direction. Males of certain species synchronize their screens when they are surrounded by other men, creating a reassuring underwater light show. Hensley plans to carefully review this behavior in collaboration with colleagues at the University of Kansas.

"Just describing how such diversity appears is our goal," said Hensley, "and this can give us insight into how it actually is happening."