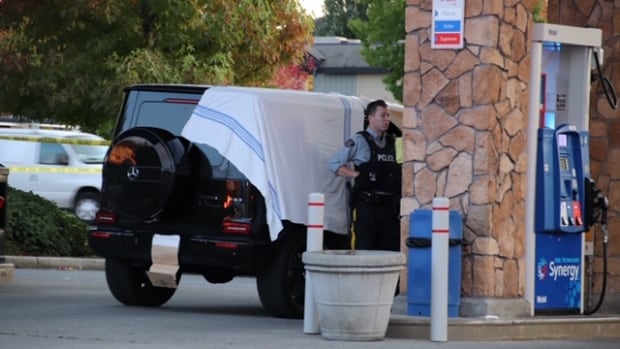 Surrey RHMP said a man was shot and killed at a Surrey gas station on the 18600 block of Fraser Highway.

Officers were filming the area around the Mobil petrol station late Saturday afternoon at the intersection of Fraser Highway and 188th Street.

A leaf was seen on it covering the passenger side of the black car parked on the gas pump.

The RHMPs say they responded to multiple 911 calls around 6pm. and found a man suffering from an apparent gunshot wound. The victim was attended by first responders but succumbed to his injuries.

The RHMP's Serious Crimes Unit is on scene and an Integrated Homicide Investigation Team (ICIT) is also called.

The petrol station where the shooting took place is in a busy shopping area. Police said although passers-by may have been injured at the time, they do not believe there is a further risk to the public.

"It is still in its early stages, but at this point in our investigation we believe this is a targeted incident," Shpl said. Eleanore Sturko from Surrey RHMP.

She urged anyone with information that may be useful to the investigation to find out through the ICIT hotline at 1-877-551-4448 or to contact Crime Stoppers.