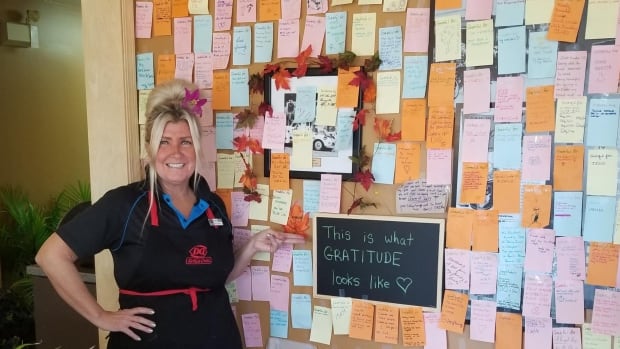 Owners of the dairy queen in South Okanagan say they are blown away by the response they received to the wallid Thanksgiving they started shortly before Thanksgiving.

What started as an idea to fill a sticky note picture with anonymous messages about what people are grateful for has turned into a giant display.

"The notes spilled over the entire wall," said Carson Kins, co-owner of the Dairy Queen in Osios.

According to Keynes estimates, visitors have filled at least 380 sticky notes so far. The project is so popular that Keynes decided to keep it going until American Thanksgiving on November 28.

"It was pretty inspiring. We hope we put a little spark in people's lives, "she told Daily blow South host Chris Walker.

Keynes says there are all sorts of messages written, ranging from funny to heart.

What stood out in particular to Keynes was written by a woman who said she was grateful for every breath she took after having a double lung transplant.

"Gave a big hug," Keynes said. "Until you can read what other people are grateful for, you don't know."

Other wallid messages include one happy child playing hockey, a grateful couple who is married for 65 years, and a happy man who is 81 years old.

"The great thing about Thanksgiving is that it's free, but the benefits are priceless," she said.

Keynes hopes that by getting people to write these messages, they will continue to write about what they are grateful for in their daily lives.

"It has a huge ripple effect here," she said.