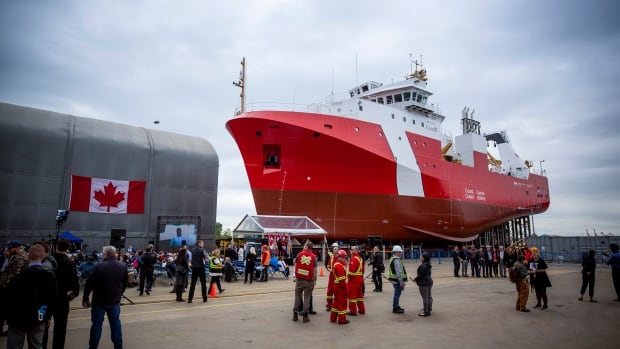 Northeastern Vancouver Shipyard began the second largest non-combat ship to be designed and built according to the Canadian National Shipbuilding Strategy Wednesday afternoon.

The ship, the captain of CCGS, Jacques Cartier, was named after the French navigator and explorer, who was the first European to map the Gulf of St. Lawrence and the shores of the River St. Lawrence.

Members of federal and provincial governments were on hand to commemorate the story of a non-combat ship to be used as an offshore fishing science (OFSV). The ship, which is over 63 meters in length, has four scientific laboratories and state-of-the-art acoustic test equipment.

At home the ship's ship will be at Dartmouth, NS. and is expected to join the coast guard after completing his marine trials later this year.

In May, Prime Minister Justin Trudeau announced his intention to build 18 new Coast Guard ships using Canadian suppliers. Up to 16 of those ships are scheduled to be built in the shipyards of north Vancouver Seaspan.

The ceremonial launch of the ship included a maritime tradition of breaking a bottle of champagne at the elbow of the ship while at the same time wishing the ship for happiness in its future trips.