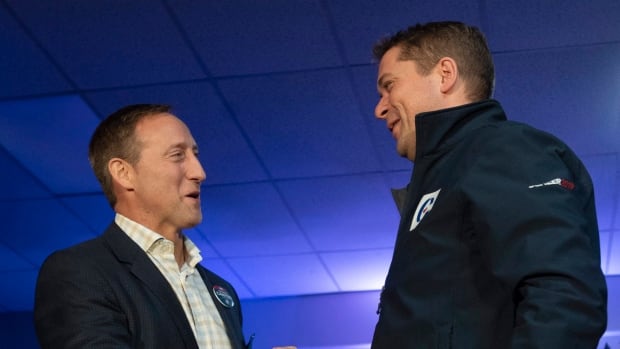 While on stage at the Canadian Institute in Washington on Wednesday, MacKay was asked about his thoughts on how the Conservatives failed to defeat Justin Trudeau's Liberals after the prime minister's public missteps and despite palpable divides across the country on issues like carbon tax.

"Yeah, to use a good Canadian analogy, it was like having a break on an open net and missing the net," MacKay told the crowd.

He also pointed to the Liberal team's efforts to tackle social issues by raising Scheer's beliefs about abortion and same-sex marriage.

"[It] Andrew Scheer's neck hung like a stinking albatross, quite frankly. And he was not able to deftly deal with those issues when the opportunities arose, "MacKay said.

In the wee hours of Thursday morning, MacKay clarified he was talking about the party's shortcomings.

"I've repeatedly said I support Andrew Scheer and I worked very hard to help the campaign," he wrote.

"Our organizing reports are false. Recent comments are about our party's shortcomings and making the necessary improvements with modern policies and better coms so we can win the next election."

Repeatedly said I support @AndrewScheer + I worked hard to help him in the campaign. Reports of me organizing false. Recent comments about our Party's shortcomings & amp; making the necessary improvements with modern policies + better coms so we can win the next election.

However, multiple sources have told CBC News that behind the scenes, people around MacKay have formed a team that is building infrastructure – including organization and fundraising – for possible leadership if Scheer quits or is pushed out.

Sources say MacKay will only consider running if Scheer is no longer in the picture.

MacKay's hockey comments are already whipping up division within the party.

"Big words for someone who didn't even get up and get on the ice," Grande Prairie-Mackenzie MP Chris Warkentin quipped on Twitter on Wednesday.

To which former Conservative MP Alex Nuttal responded, "Have some respect for the man who gave up his leadership to the right so people like you could get elected."

Have some respect for the man who gave up his leadership to the right so people like you could get elected.

Scheer will face the full batch of newly elected and re-elected MPs next week, and has already met with senior members of his caucus to discuss the way forward in Parliament.

The Conservatives will hold a convention and leadership review in April. However, the Reform Act, introduced by Conservative Leader Michael Chong and passed into law back in 2015, gives MPs the power to trigger a leadership review, and subsequently vote to oust their leader at a caucus meeting.

MacKay led the Progressive Conservatives in 2003 and won.

In December that same year, he merged the PC party with Stephen Harper's Canadian Alliance. The new party was named the Conservative Party of Canada, and Harper eventually became leader.