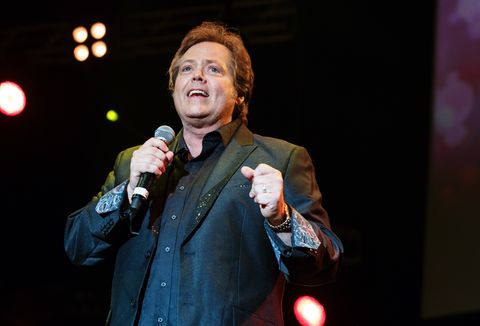 Jimmy Osmond, known for being part of The Osmonds and a successful solo singer, suffered a stroke at the age of 55.

He played Captain Hook in a pantomime Peter Pan at the Hippodrome in Birmingham, when she began to feel bad, but managed to "push through" the play.

A spokesman for Osomon is quoted as saying: "On Thursday evening on December 27th, after performing in the evening of Peter Pan at the Birmingham Hippodrome, Jimmy Osmond was transferred directly to a hospital and diagnosed with a stroke.

"He is grateful for all good wishes and will use the time in the New Year."

Darren Day was confirmed to assume the role of production at the end of the week.

Jimmy appears on the Celebrity MasterChef in 2016

"Jimmy wanted to be part of the well-known hood of Hippodrome, and his portrayal of Captain Hook was deep and cordial.

"He won the worship not only of our audience, but also of all our employees – we all send Jimi and his family with many wishes for a quick recovery."

Known as "The Little" Jimmy, he is the youngest member of the Osmond family and at the age of 9 he became the youngest man to have a 1972 single Briton with a single with "Liverpool Lover of the Century".

Osmond – Alan, Wayne, Merrill, Jay and Donnie – got their highest profile in the early 1970s with hits, including "The Crazy Horses" and "Love Me For Cause".

Jimmy also starred in reality TV shows as I'm a celebrity … Take me away from here! in 2005 and Celebrity MasterChef in 2016.