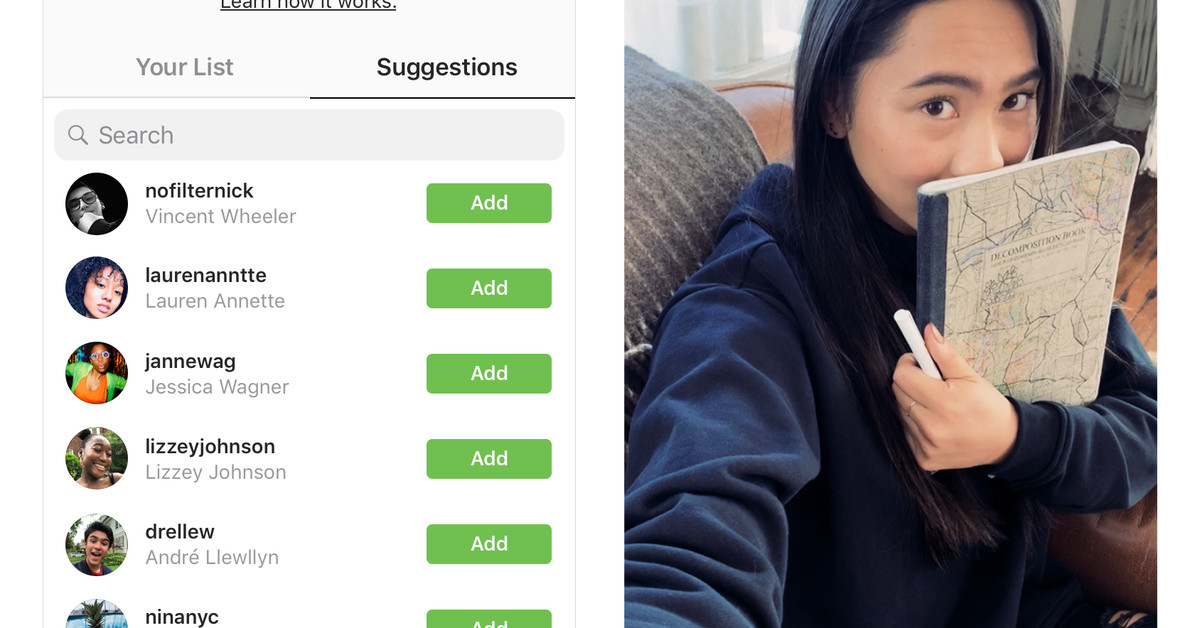 In June 2017, Instagram announced that it had begun to test a feature that they later called "favorites", an attempt to uncover a list of friends and encourage people to share more, allowing them to post messages to a more limited group of their followers. In response to the rise of "Finstagrams" – private accounts followed only by the company's closest friends – the company tried to give users more private sharing tools, with a set of features that touched almost every part of the application.

Almost 18 months later, the arrival of Instagram on private sharing has arrived and looks very different than in 2017. Now called "close friends", this option will be limited to stories. And while it's down from the previous incarnation, close friends could alter Instagram's social dynamics.

To use the new function, open the Stories camera and make a photo or video. After you finish your recording, you will notice a new green circle with a white star in it. Tap it, and you'll be brought to the list of close friends where you can add people to your inner circle. Instagram will offer friends for you based on the people you interact with most or you can use a search box to complete your list. In testing, people usually add about two dozen people, says Robbie Stein, the leading product on Instagram.

When your list is complete, you can share it with your close friends by touching the green circle whenever you take a picture or play a story for a story. (Feedback from my product: this button is small and it would significantly benefit from being enlarged.) After you do, your close friends will see a green ring around your story in the food top drawer. It's a visual signal that a close friend shares something more common with you, and you need to stand out from the standard pink-purple gradient rings.

Friends lists are not a new idea – and in most social networks, they have failed. As I wrote in 2017:

A few years ago, Foursquare co-founder Denis Crowley told me that the biggest requirement for users is the option to check only for a small group of friends. Square built the office, Crowley told me, but hardly anyone used it.

Facebook, which owns Instagram, has its own friends lists. But their implementation has always been clumsy and seems to be relatively under-utilized. Twitter lists differ in that they are public, and the company has not made any improvements to them in many years.

"This is a hard nut to fight, partly because social networks are dynamic," says Stein. People may be a close friend one day and get away from you over time. For Instagram, this meant that adding and removing people on the list had to be as socially painless as possible. The company hopes that by deleting the list of all notifications outside the green ring, it will succeed to allow people to share with smaller groups.

And I assume that close friends will not be the only people who use "close friends". It's easy to imagine brands that create fan clubs or VIP lists in which people can decide to get additional opinions. Instagram has not built any special tools for publishers to manage these lists, but I wonder if over time brands will not put pressure on the company to allow them to use the list of close friends for business purposes.

In the meantime, I'm glad that close friends have finally arrived. While more people are moving from Facebook to Instagram, the application has begun to face the same problem with the collapse of the context, making it the flagship of its parent company. When you simultaneously post images to your best friend, your ex-girlfriend, your colleagues, and some person you met once at a wedding over time will probably share less and less. That's why I find the notification in the app for how many people watched my ephemeral Instagram stories to be so consistent. The vast majority of these people never connect with my stories, leaving me with the constant impression that I'm just turning around.

For Instagram to continue to thrive, it must set aside space for true friends to stay in touch. Close friends are a welcome step in that direction.