Feelings, murders and chaos: The most anticipated films, TV shows to be seen in 2019 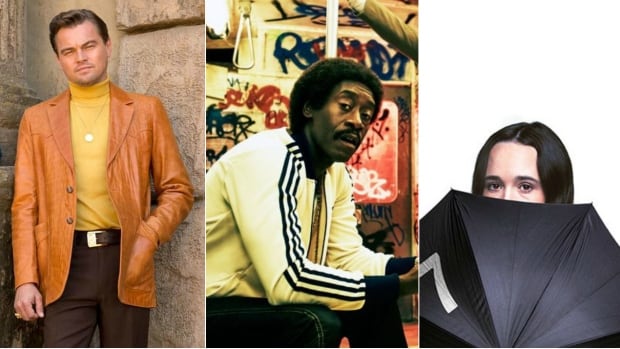 Leonardo DiCaprio, left, starring in the 60's Los Angeles story, Don Chelad, centrally to the left, in the middle of the fall of the stock market in the year 87, Ellen Page, center right, in the new series Netflix and Bri Bride Larson as Captain Marvel only a few of the titles in the store for 2019. (Columbia Pictures / Showtime / Netflix / Walt Disney Studios)

Whether it is a long-awaited conclusion Game of Thrones or to all the stars that carry it Lion King back to the big screen, 2019 is filled with a lot to watch for large and small screen fans alike.

The most anticipated TV:

Soon he comes to HBO Watchmen, a series of eight works based on the visionary graphic novel by Alan Moore and Dave Gibbons. It's a lot to live up to, but Lost the creator of the series "Damon Lindelof" has promised more than "remix" than a literal narration of the classic comic book. If you look for more recklessness, Neil Gayman and Terry Pratchett Good sign finds David Tennant and Michael Sheen as demons and angels who are trying to stop Armageddon. Netflix subscribers will soon be able to open On Umbrella Academy, adaptation of comics for a group of hostile superheroes starring Ellen Page.

It's a long wait, but fire and ice will finally bump when Game of Thrones" eighth and final season hit HBO in April. Women of Great little lies are returning, but without Canadian director Jean-Marc Vale. Children of Foreign works to continue their ode in the 80s as wonderfully beautiful serial pedals in Season 3 with Carey Elvis joining the actor as mayor of the city. Talking about reworked favorites, PSStreet legally has a mixture of old and new people who go to court in March.

Your next obsession will be too big

Honestly won his Oscar win, Sam Rockwell's next project Fosse / Verdon where he teamed up with Michelle Williams to explore the complicated relationship between choreographer Bob Fos and Broadway legend Gwen Verdon.

If you can not get enough since the '80s, the new Don Cheadle Showtime series Black Monday is a comedy comedy set on Wall Street. If it's the 60s when you dig, Chris Payne works with Miracle is a wife director Petty Jenkins on the detective drama of wisdom I'm a night inspired by the case of the murder of Black Dahlia.

So many super heroes

Avengers: Endgame arrives in April to conclude the story a decade under construction. But before we see what will happen to Captain America and friends, Bree's Larsson will go to heaven like Captain Marvel in Marvel's first film. DC comedic fans can look forward to calming along with Shazam! in the Toronto-shot movie for a boy in a super-adult body. Other pieces of the spandex miracle on the road include Peter Parker's European holiday a.k.a. Spiderman: Far from home and Dark Phoenix, from the X-Men prequel in which Sophie Turner plays Game of Thrones.

If something can bite out Avengers Big screen dominance it is Godzilla: The monster king, beasts battle thief holding to screens in May. For simpler pleasures, there are John Vic: Chapter 3, in which there is Kiyan Reeves, who is fighting against ninjas and riding a horse.

On A man in black franchise gets re-arranged in June with Men in Black International starring Chris Homsworth and Tessa Thompson. Also in June, Sheriff Woody and friends are returning Toy Story 4 whileStar Wars fans will have to wait until December to find out what the director J. Abrams keeps him Episode IX.

Perhaps the most prestigious offer of 2019 is the adaptation of the novel by Louisa May Alcott, Small women. Lady Bird Director Greta Gervig composed an acting cast of all stars including Searce Ronan, Timothy Chalamet, Emma Watson and Meryl Streep. Miss Bala is an adaptation of the English language to the great thriller in Spanish, which now plays Jin Rodriguez as a tortured queen of beauty, caught in a crossfire of a drug war. If you're looking for something lighter, there's a new oneAngels of Charlie starring Kristen Stewart and Naomi Scott.

But let's be honest, in 2019, Disney dominates. Whether it's computer animated or live action, the audience can not get enough new versions of the classic cartoons they've grown up to. Soon it will come Dumbo, Tim Burton is an elephant flying. Beyoncé is just part of the stunning cast vote for Lion King, then there is a live action version Aladdin. The film is played by Canadian Mena Masoud as Aladdin, but is the world ready for Will Smith as a gin in the bottle? (Do not worry, Smith says he'll be blue.)

In July, Quentin Tarantino served Leonardo DiCaprio in a bottleneck, and Brad Pitt makes his best imitation of Robert Redford in the 60 themedOnce for a while in Hollywood. In March, Get out director Jordan Pule presents Us, his wide-eyed watching film starring Elizabeth Moss and Lupita Niño.

In Canadian movies with buzzworthy, here is the mystery set in the Niagara region called Clifton Hill from In Her Place director Albert Shin. Spring also brings George, the big screen adaptation of the successful stage performance, where two women have the same character.

For autumn music lovers, Renee Zellweger returns to the silver screen Judy, a film set around a series of sold out concerts by Judy Garland in 1968. But before that, in May, Taron Yegerton took steps in Elton John's platforms for the broad biopsy Rocketman.