Home / bulgaria / Bulgaria ended with a loss from Serbia in Kolodrum

Bulgaria ended with a loss from Serbia in Kolodrum 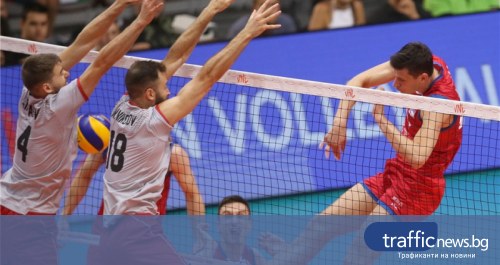 Bulgarian national teams ended their loss with their participation in the League of Nations this year. Players of Silvano Prendi were defeated by Serbia 0: 3 (23:25, 12:25, 18:25) in their last match of Group 19 on the last fifth weekend of the group stage played tonight at the Kolodrum Hall in Plovdiv.

Thus, the Bulgarian "lions" finished 12th in the final league of the Nations with 5 wins, 10 losses and 13 points. Serbia, which has a lot of reshaped and rejuvenated lineup, ends 11th in the ranking with 6 wins, 9 losses and 17 points, Sportal.bg writes.

The start of the first match was equal to 3: 3, after Bulgaria led 5: 3 after blocking Rosalin Penchev and Tsevan Sokolov's strong opponent. The difference slightly increased to 7: 4 after the excellent blockade of Viktor Josifov, and the technical break was 8: 5 after Rosalyn Penchev's technical game. The lilies kept the lead up to 11: 8 after the successful attack by Martin Atanasov and the wonderful appearance in the network of Cetц Sokolov. Gradually Serbia managed to equal itself in 15:15 after the blockade of Srecko Lisinac, and even with 16:15 after the block-block of Drazen Lupuric.

The result was 18:16 after the Lisinac blockade, which forced Silvano Prandi to take a time-out. "Tricolor" immediately leveled in 18:18 after a mistake from the service of Marko Ivoivich and a new excellent blockade of Cezo Sokolov. "The floor" was again brought in at 21:19 after Nemanja Petric's attack and the second break for Silvano Prandi. However, Serbia reached the gambler in 24:21 after the attack on Rosalyn Penchev, and then took the side to 25:23 after an extremely controversial game and the blockade of Lisinac. At the beginning of the second part, Serbia dragged 5: 3, but Bulgaria immediately leveled 5: 5 with the error of Nemanja Petric and the blockade of Viktor Josifov. However, the technical break came at 8: 6 for "sailing" after Marko Ivoic's attack and the counter of Drazen Lubricic. Then came the shareholder of the Serbian distributor Alexa Batak and 9: 6. The difference grew to 13: 7 after two powerful Ives of aces and an attack on Martin Atanasov. Bulgaria dropped down to 13:10 after two Serbian mistakes and a technical start to Atanasov, but our Western neighbors promptly renewed the lead at 16:10 after three consecutive mistakes by the lions. Then the debut for the Bulgarian national team was made by Distributor Chono Penchev to the audience in Plovdiv. Serbia's advantage increased to 19:10 after the Asian handicap for Srecko Lisinac, and then the result was 22:12 after two new direct strikes, this time to Lukuric. In the end, the Serbs defeated the game with the defeated 25:12.

And the third game started better for the Serbs who led 3: 1 after a new racket by Srecko Lisinac and Nemanja Petric's opponent, then 6-2 after Petric's excellent performance and Tetko Sokolov's attack. The first technical break was 8: 4 for Serbia after the successful attack on Marko Ivovic. The difference grew to 12: 5 after two consecutive Serbian blockades of Lisinac and Ivic, which forced Silvano Prandi to take the time. This came into force, and the "tricolor" dropped first at 12: 8 after two Serbian mistakes and the blockade of Viktor Josifov, and then at 13:10 after the strong counter of Cezo Sokolov. The game between the two teams continued equally and the second technical break came at 16:12 for "sailing" after the attack in the center of Peter Krusmanovic. Equal play continued until 20:16 for our Western neighbors after the technical start of Drazen Ljuburic. In the end, Serbia reached one game in 24:16 after two new Ivica aces, and then won with 25:18 and 3: 0 after the heavy attack by Ljuburic.