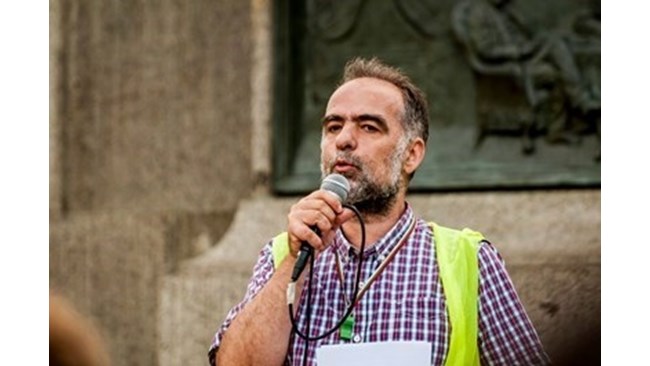 After nearly a day of dispute, the environmentalist apologized

"The cheapest were the Jews who travel by horse-drawn carriages – completely free." This was written by the candidate for municipal councilor from Democratic Bulgaria in Sofia, Toma Belev, during a Facebook discussion. I do not know the context of this statement. I don't want to know. Because it doesn't matter. If it was a joke it's not funny. If there was a dispute in the dispute, it's even worse. I was just following the ensuing discussion, in which Belev was convinced with reasonable arguments to apologize for the stupidity he wrote, and he flatly refused to do so. "

This is how political scientist Toma Bikov, who is GERB's deputy, started her post on Facebook in another publication – by ecologist Toma Belev, president of the private environmental organization Green Balkans.. He is a longtime expert on protected areas management in Bulgaria, a former director of the Vitosha Natural Park, an initiator and president of the Association of Parks in Bulgaria.

The anti-Semitic post by Toma Belev, who is also a candidate for Democratic municipal councilor, has angered much of the Facebook community.

In addition, it comes from a person on the Democratic Bulgaria roster – a formation that claims to represent the smartest people in society.

The question of whether Belev knew what he was doing and talking about was no longer just his problem, but also the formation he had nominated for a constituency. Democratic Bulgaria is a liberal formation.

She is extremely sensitive to such nonsense and dangerous statements. I am sure that if Belev's statement was made by a representative of another party, Democratic Bulgaria would already have a clear position.

In Belev's case, however, taking a similar position is even more important. Because she is a person who represents the ideas, views and why not the "sense of humor" of Democratic Bulgaria. Personally, I expect the DSB, Yes, Bulgaria and the Greens, both individually and individually, to withdraw their support for Belev and thereby show that they do not measure anti-Semitism with a different march. Otherwise, the three parties will lose the legitimacy to speak about these issues, "concludes the post by Toma Bikov.

The posting of Toma Belev on Facebook was also commented by Deputy Foreign Minister and GERB President Young Georg Georgiev.

Here's what he wrote:

"How much can a person's spirit fall? How suddenly is the greasy, yesterday's hiding place of the true I able to shine when the ugliness and vulgarity reach its peak?

Well, we answer these and other questions from his green, Democratic Bulgaria's candidate for municipal councilor, Toma Belev!

The comment he made on social networks should not surprise us. It is something that cannot be called unexpectedly reproduced by an unseen and brazen person like the aforementioned "green".

An interesting coincidence. I was. I was. What reminds me of that name …? Ah, wasn't Alexander Belev …? Commissioner for Jewish Affairs! It disagrees with the number of Bulgarian Jews demanding deportation by the Nazis, scoffs and writes it several times higher. Well, this is not Alexander, but he is still proudly named.

In conclusion, the frightening and unfortunate fact is that people like a volume cell (not a small letter, by accident) walk through our streets and pollute our society and nature more than any garbage is thrown away. It is frightening that they are made on moral upheavals, on compasses of integrity and social responsibility. Yes, but no.

Democratic Bulgaria, great liberals? Where is your strong voice now to rise up and silence YOUR candidate for municipal councilor ?!

And no. I can assure you that this miracle will not last for three days and that your Belev will not be disturbed by the opposite behavior. "

"Mr. Belev, I cannot write on Assen Genov's wallid because we are not friends with the PB, but I post a screenshot here to ask if such anti-Semitic comments are part of your election campaign? Or is it an election campaign? DB campaign, Bozidar Bozhanov, Hristo Ivanov?

If you do, then please tell me again so I can campaign against your application in the coming days.

Bulgarian writer and diplomat Leah Cohen, one of the leaders of the first UDF, wrote the following:

"I'm sorry for mixing in someone else's, but your answer was ten times signaled. That's really inappropriate. It's also inaccurate. For every Jewish deportation to Treblinka, the Bulgarian government pays 100 Reichsmarks (250 were initially requested) to the Germans, because the operation is called "Jewish cleansing." A lot of infusions in one inappropriate replica should apologize to people like me. 58 people from my family left with these carriages. Your replica is really offensive. "

VMRO Jewish MP Alexander Sidy commented that Toma Belev did not want to apologize and urged him to:

"Belev (Thomas, not Alexander, though acting as the head of the CEV – Commissioner for Jewish Affairs) continues to behave inappropriately. Instead of apologizing for his frightening comment, he behaved exactly like a top German World War II official. I have never forgotten or even concealed my Jewish background! I have said many times that people like this anti-Semitic individual, Toma Belev, are pink-liberal fascists. His speech today, like the finger pointing and avoiding excuses, just proves it! I have repeatedly stated my view of Lukov and the procession in his memory. To attribute to me the opinions of others, and to summarize them all for one thing, is a reference to those terrible times which the fascist Belev (Thomas, not Alexander) has clearly missed. Are you a "Democratic Bulgaria" in solidarity with the fascist Belev?!? #BelevFashist #BelevEkscuse me! ”.

After nearly 24-hour arguments in which Toma Belev preferred to be honest, he apologized. Here's what you re-wrote in your Facebook account:

"Regarding the growing demands of the VMRO and GERB politicians to quit my campaign, I am obliged to say:

I apologize to all those affected by the inappropriate and abusive way in which I expressed my view that in our day-to-day relationships, we easily allow ourselves to judge the other solely on the basis of race, ethnicity, sex, age or skin color, and thereby opening up the possibility of returning to the shameful times of Nazism and Fascism. I didn't want to hurt anyone's feelings.