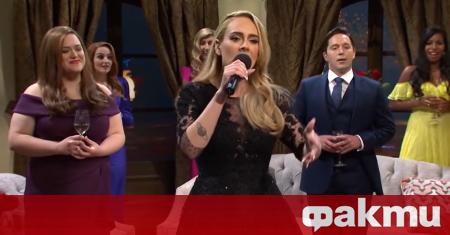 Despite the expectations of her fans that she will present a new album on the show, Adele, 32, did not do so. A few days ago, she wrote on Instagram that the show will focus entirely on her role as host.

Adele has not released an album in five years, and her previous appearance on American television was three years ago, at the 2017 Grammy Awards. “The rise of her career in the United States began twelve years ago after her live appearance on Saturday night.”

“I know I look very different from the last time he saw me. But in fact, the reason is the restriction because of Kovid-19. I had to travel and I only had to take half of myself and that is the half I chose. To bring,” the singer said. when he appeared in the studio.

Adele admitted that she was very scared to lead the show and sing at the same time, but still sang during one of the sketches. In another, she takes on the appearance of a ghost and then incarnates as an Englishwoman, secretly addicted to coloring books, who asks the fortune teller what the future holds. “I do not see concerts in 2020. “Just coloring,” predicted her divination, performed by comedian Kate McKinnon.

During the 90-minute show, Adele’s guest was the singer, known by the pseudonym Herr.

Adele dedicated the episode of the show to all the people who are at the forefront of the fight against the new coronavirus pandemic, some of whom were invited to be guests in a New York studio while maintaining social distance.