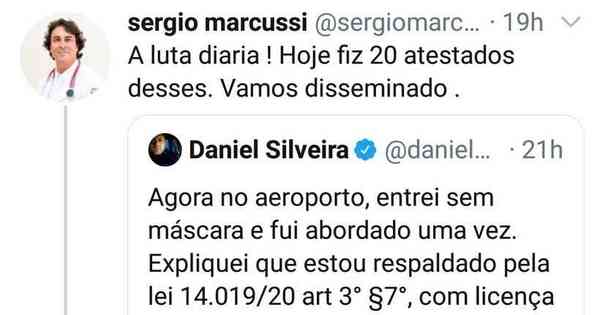 Dr. Sergio Marcusi, who owns a clinic in Savasi, in the center-south region of Belo Horizonte, has caused controversy in the area (27). Through social media, he offers to give a medical certificate, after consultation, to patients who report that they face some health restrictions due to the use of the mask, one of the main weapons against COVID-19.

On Twitter, he quoted a post by Deputy Daniel Silveira (PSL / RJ), who became famous after breaking a plaque in honor of Mariela Franco in 2018.

Now at the airport, I entered without a mask and they approached me once. I explained that I am supported by the law 14.019 / 20 art. 3 7, with a medical license guaranteeing me not to use it and I continued the mission. This ideological snout must be fought.

The politician’s text says that he managed to enter the airport without, as he said, an “ideological snout”, based on the law that forced him to use mascaras Without Brazil.

This is because paragraph 7 of Article 3 of the legislation states that the obligation does not apply to persons with “any other disability which prevents them from making proper use of the face protection mask”.

When quoting the deputy’s mandate, Dr. Sergio Marcusi changed: “The daily struggle (sic)! Today I made 20 such certificates. “We distribute it (sic),” said the health worker.

In response to another user, Sergio sent his clinic phone number for a consultation on whether or not to issue the certificate.

“There seems to be repercussions on the inability of some people not to wear masks because they develop a chronic headache and, for that, use the law … It gives a good repercussion. Many people identify with the same problem. People ask: why so much? “Many people have a headache. Is it a common pathology? Yes. Wearing a mask is a common pathology,” the doctor said on Instagram.

Sergio Marcusi also said that he does not “distribute certificates”, but he issues it afterwards. search through patient reports. Therefore, it is only “fulfillment of the law”.

“If my patient comes to my office and tells me he has a headache, panic, anxiety, acne or any other illness (it is not for me, as a doctor, to talk about the patient’s feelings. If the patient tells me he is in pain, I have to “to accept the patient’s pain,” he said.

Even with the statements, the doctor blackened his Twitter account where he offered consultations. With that, the messages were also removed.

It is worth remembering that the use of the mask remains mandatory in Belo Horizonte whenever a citizen has to walk the streets or go to a place with a crowd of people, such as hospitals, businesses and companies.

Sergio Luiz Marcusi Vitor da Silva joined the Federal Council of Medicine (CFM) in April 1993 and is a full member of CFM.

He previously worked at So Paolo, but today his professional record at Minas Gerais. According to the CFM registry, Sergio specializes in gynecology and obstetrics and nutrition. He also graduated in law.

Through social networks, the doctor strongly advocates the use of drugs hydroxychloroquine and ivermectin for the treatment of KOVID-19 – two drugs still without scientific evidence.

He also frequently stands for President Airair Bolsonaro (without a party) and has voted for Bruno Engler (PRTB), who is running for the BiH City Hall.

Sergio Marcusi is campaigning for Nicolas Ferreira (PRTB), a candidate for councilor in BiH and coordinator of the Direita Minas movement.

“The Regional Council of Medicine of the state Minas Gerais (CRM-MG) investigates complaints for formal, commercial and public knowledge, in accordance with the procedures set out in the Code of Professional Technical Process (CEPP), and the procedures are confidential. Formal complaints must be made in writing and, if possible, contain a detailed report of the facts and full identification of those involved, they must be signed and documented, they can be submitted to the CRM-MG headquarters in BiH or to regional offices, inland; sent by mail or e-mail [email protected] All documents and pictures must be legible. Anonymous complaints are not accepted. “