Ivory Coast is fighting against the return of dengue fever 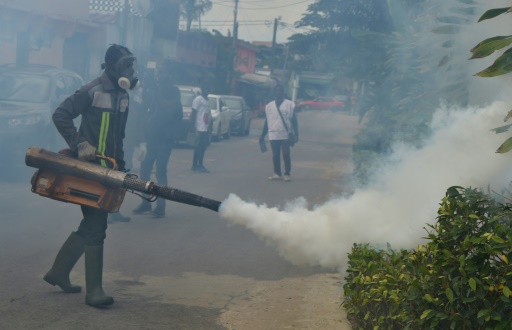 "You have to cover your goods!" Dr. Fofana advises a vegetable seller in Abidjan, while a thick insecticide smoke invades the street to kill dengue-mosquito-type mosquitoes, and sometimes a deadly disease that brings him back to Ivory Coast.

An epidemic has occurred since May in this country in West Africa, where 130 cases and two deaths were registered.

In order to counter the progression of this "global recurrence" disease on a global scale, which appeared in West Africa in 2006, health authorities are conducting a campaign to control mosquitoes and sensitization in the economic capital of Iowa, Abidjan, where in the largest some cases were discovered.

"Larvae multiply in stagnant water, for example in used tires, you must never store water in a bucket at an outdoor home and regularly throw water from plates of green plants," advises Dr. Diakaaria Fofana, deputy director for vector control at the National Institute of Public Hygiene (INHP).

This medical anthropologist oversees one of the teams responsible for spraying a larval product in the stagnant waters of the city, the work of Sisyphus in the agglomeration of five million people, especially during the rainy season.

Without a vaccine available in Côte d'Ivoire and in the absence of specific dengue treatment, responsible for thousands of deaths worldwide, mainly among children, "the only effective way to fight is to fight the mosquito," the doctor said.

The way dengue is transmitted is similar to that of malaria: female mosquitoes become infected by stabbing a person carrying the virus, which then inoculates other people.

In Ivory Coast, where malaria covers one-third of medical consultations, many Ivorians resort to self-healing when they feel the symptoms with which they are accustomed (fever, nausea, pain in the body, vomiting).

"It's a real problem because the symptoms of malaria, dengue fever, typhoid fever, or yellow fever are similar, you should have a blood test," says Dr. Fofana, explaining that inappropriate drugs can aggravate the situation.

There is a dengue fever vaccine, but there is currently no Ivory Coast vaccine, because "there are many side effects, it's expensive and does not take into account the four types of dengue," according to Professor Joseph Wroh Beni Bi, director of INHP.

Developed by the French pharmaceutical group Sanofi Pasteur and approved at the end of 2015 in several countries in Latin America and Asia, the first dengue fever vaccine (Denguctionia) is also suspected to cause the death of dozens of children. The Philippine government filed a lawsuit against the lab in March.

Half of the world's population is now at risk of dengue, according to the World Health Organization (WHO), mainly in tropical and subtropical regions, as well as in urban and semi-urban areas.

The WHO estimates that there are 50 million annual cases, of which 500,000 cases of dengue haemorrhage are fatal in 2.5% of cases.

Less lethal than malaria, resulting in 435,000 deaths worldwide in 2017, according to the WHO, dengue progresses and hit Europe where the first two cases were reported in 2010. So in France, "the vector mosquito is embedded in 18 French departments" by 101, according to the Pasteur Institute.

In Ivory Coast, where the epidemic in 2017 has already caused the death of two people, the threat is seriously understood by residents.

"We know the risks," Bambba Segbe, a resident of Abidjan, who attended the spectacular mosquito control operation, added: "For nothing we call dengue the big brother of malaria."