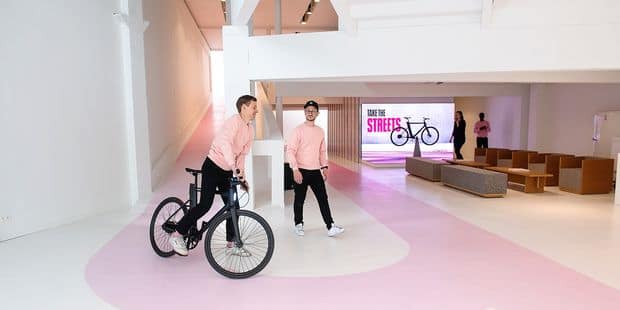 
The electric bicycle brand presents its new model in its showroom.

Cowboy is an electric and connected bike developed with the launch of Brussels. Launched on the market a year ago, the Cowboy bicycle does not hide its ambitions: "Modernize the electric bike that makes it more beautiful, easier and more fluid, all at an affordable price." For a little less than 2,000 euros, the launch offers a black 16-kg mast, which can travel up to 25 km / h.

"Our typical client is a resident of the city who uses his bike eight times a week, mainly for travel" says Adrian Rousse, executive director of Cowboy. Over the past year, the company has sold more than a thousand bicycles and generates two million euros in circulation. By virtue of this success, today is a new model, more prominent. "The main improvement is autonomy: before, the engine had up to 50 km of autonomy. Now there are 70. It's also more comfortable and more fluid.

Thanks to these upgrades, Cowboy hopes to sell 10,000 bikes this year, increasing his turnover to 15m euros. For this, the company now conquers France, the Netherlands and Germany. "We got to a milestone: we traveled a bicycle with a cowboy for a million kilometers. This is a strong signal that comes just as we start our expansion in Europe. As a primarily digital platform, opening a new market does not require much investment " Adrien Rousse continues.

One of the important investments concerns test driver : home tests that the brand now offers in some of the major European cities, such as Paris, Berlin or Amsterdam, in addition to the twelve cities already included in Belgium.

"Half of our customers want to test the bicycle before they buy it and one in five buyers buy the bicycle", rejoices at Adrien Rousse. In order to present its new model as it should be in Brussels, Cowboy opened the salon, a salon that is available today. Covering an area of ​​700 m ², the site includes a indoor enclosure that allows visitors to try out the bicycle at best conditions.