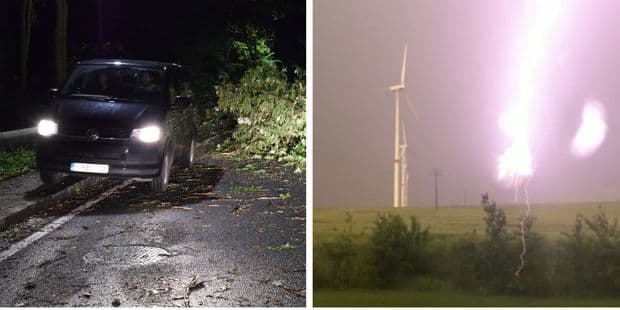 Throughout Belgium, firefighters were called for intervention.

At least several interventions have been mobilized by firefighters on Wednesday afternoon across the entire Walloon Brabant territory, it was reported on Thursday from the Nivel Center in the relief zone. Clearing the trees and branches of the public road, as well as clearing the roads burdened by landslides, are the main operations carried out by teams of various barracks, which are strongly required from Wednesday around 4 pm.

A third-boat flood also mobilized the sapper, on Thursday morning around 9:20 am, on the E411 highway to Luxembourg, near Corro-le-Grand, disrupting the flow of traffic.

At the same time, other firefighters had to clean up a layer of about ten centimeters of mud, spanning a hundred yards of Joseph Deschamps, between Limal and Vaavre.

Firefighters in Brussels had to intervene little more than 80 times during the night from Wednesday to Thursday, in bad weather, said Fire Department spokesman Volter Derev. "There were 34 interventions for flooded roads, 13 tree and branch interventions that burdened the public highway, four outings for buildings that threatened to fall into public roads and finally 37 interventions at home for water concerns," explains Walter Derriuu, on Thursday morning.

Due to the flooding of the sidewalks, the tunnels Vleurgat, Stéphanie, Arts-Loi and Georges-Henri were closed for traffic in both directions during the night from Wednesday to Thursday, the Brussels Mobility Center said. They were gradually re-opened before 3:00 am on Thursday.

The weather conditions also resulted in closing the traffic to Bois de La Cambre, Wednesday at 20:30. It should remain unavailable until Thursday morning. Failure to cut off electricity was also announced shortly before midnight in Brussels and Isels of Sibelga, a gas and electricity network manager in the capital, who did not indicate if this was the result of bad weather. The failure was solved around 3:00 am.

The night from Wednesday to Thursday was rampant in the Liege region due to bad weather. Firefighters in different zones received dozens of calls. The firefighters in Liege said they were about fifty times, mainly for carrying the basement, breaking roofs and sections. They also intervened to clean the evacuation of water and flooded bunkers. On the side of Verviers, firefighters came out on the roof of the house and a torn roof. They also pumped out basements on the side of Welkenweed.

Finally, Hui held eight interventions. Most were held on the side of Haomir and Horris for minimal facts: pumping galleries and cutting trees on roads. "Nothing is impressive," Chemeco's Rescue Zone at Belga said.

Finally, firefighters from the province of Liège did not have much intervention to perform at night.

About fifteen interventions in Western Ennocot

A storm and heavy rains hit Wallonia in Picardy on Wednesday night. Firefighters intervened about fifteen times. No one is hurt.

It was 21:00 when storms broke out in Wallonia Picardy. These storms were accompanied by torrential rains. The emergency service of Wallonia Picardy recorded the first calls at around 22 o'clock. Firefighters took about fifteen times in the regions of Turany, Pech, At, Muscron, Lesine and Berniceart. The interventions focused on flooded cellars. Firefighters have also cut several trees lying on the ground and hinder traffic on public roads.