Suddenly why Ershad in the hospital? 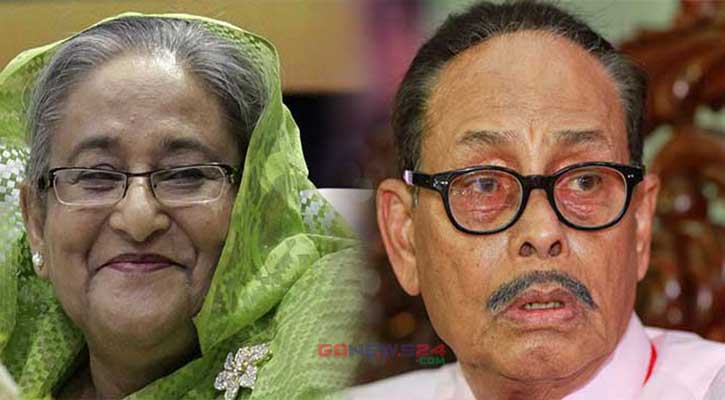 dhaka: The Jatiya party devotes time to finalizing the nomination of the party, although eleven parliamentary elections announced by the Great Alliance have been announced. So far JP has not formally discussed with the Awami League, the main ally of the Great Alliance. Although party leaders discussed informal talks, they have not yet learned anything.

On Saturday evening, the letter was sent to the schedule of the official negotiation schedule. The leader of the party, Hussein Muhammad Ershad, forwarded the letter to the Prime Minister and the chairman of the Awami League, Sheikh Hasina, seeking time to discuss the places. On behalf of Ershad, his political secretary, Sunil Shuvarra, sent a letter to the general secretary of the Awami League in the evening to Ganobhaban.

Meanwhile, party chairman and former president Hussein Muhammad Ershad were admitted to Combined Military Hospital after they suddenly got into trouble with the nomination and the alliance. He was admitted to the hospital on Thursday evening because of illness. He's undergoing treatment until he writes the report.

Already, there was a buzz about the case after Ershad was admitted to Combined Military Hospital in Dhaka. Before the national elections in 2014, he was accused of having been forced to join a military hospital. The question is still how serious his illness is.

BBC Bangla talked to the secretary general of the party, Dżatiy Ruhul Amin Hawlader, about Ershad's disease. Hussain Muhammad Ershad was present at the Combined Military Hospital in Dhaka.

Ruhul Amin Howlader said he (Ershad) went to the hospital for routine control. Regularly visits. All senior hospital officials look after him. Brigadier General, People of the rank of Major General of Gen. Dyw.

Are there any particular physical defects? In answer to this question, he said: no, simple control. Blood sugar, heart, prepress. Blood cells are also visible. He often stayed in this state for half a day. He was the head of the army. Naturally, Cantonment is also a trusted place. No less than at home. He returned a few days from there again.

Even before the elections in 2014, he had to be admitted to the hospital – he laughed at it, he said, the day does not go one way. Is it always the same? Not always the same. He went a little, after 2 days, he will come back again.

Ershad himself gladly took him to the hospital? – In response to such a question, he said, no, do not take (forced).

Are there any contacts with Ershad activists in a military hospital? Therefore, he said, I arrived by noon (Saturday). I spoke a little earlier. No problem. This is not what you think. The words that are spoken are false, misleading.

When it comes to choosing a coalition with the ruling party, Hawlader said that the talks (with the Awami League) are in a very natural and sincere environment. If you are a finalist, you will know. There is no such a disadvantage. We are far ahead of us. Can be informed within 2/4 days.

It happened before the tenth election

In 2013, there were many tensions in participating in the Jatiya party elections. Although there was talk of participation in the first election, on December 3 a boycott of the sudden announcement was announced. He said he did not take part in all elections.

This decision of the Jatiya party put the Awami League government in great danger. However, under the leadership of Raushan Ershad, part of the party Jatiya announced that the elections would go away.

In one of these milieus, in the second week of December, the RAB was detained by former Rashid, former president, Ershad. However, RAB found out he was not arrested. He was taken to a military hospital for treatment. However, some party leaders claimed that Ershad was not sick.

After a few days Ershad had to spend in a military hospital. There were many restrictions on meeting him. Although he is undergoing treatment in a hospital, Ershad was seen in golf as well as in newspapers and newspapers.