The government has at least got some pictures … 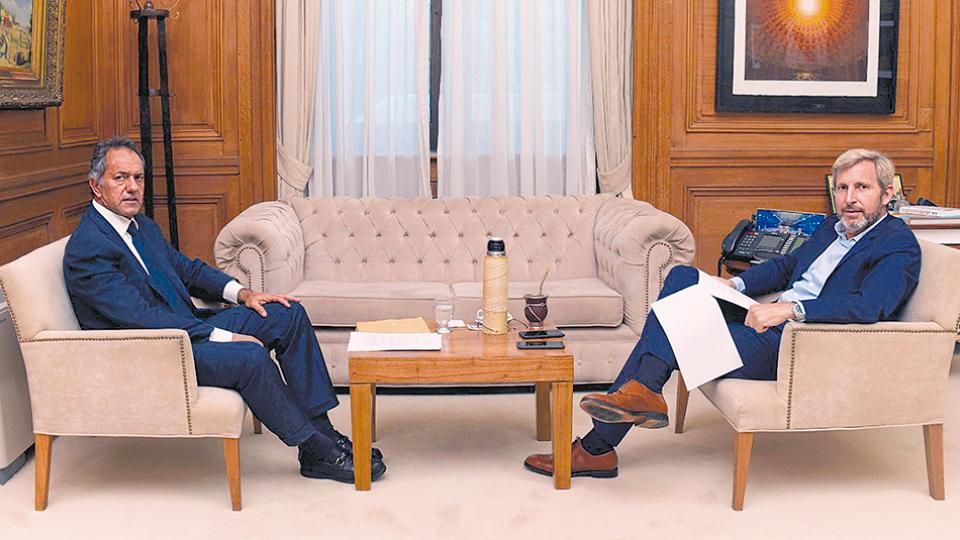 The government launched a dialogue with governors about 10 points suggested by President Mauricio Macri in his letter, also sent to presidential candidates, businessmen, cults and CGT. After several rejections of opposition leaders and governors, the ruling party had a pause yesterday. Interior Minister Rogelio Frieria managed to display the first photographs of the meetings: they were with the Chaco governor, Domingo Pepo, with the one from Entre Rios, Gustavo Bordeaux and with the previous candidate Daniel Osvaldo Shzoli, who opened the presidential circle. Sergio Massa, for his part, sent another letter, full of reproach. Until now, they are not sure whether there will be meetings with Christina Fernandez de Kirchner or Roberto Lavanga.

The agenda of the presidential convocation – which has already changed several times in the form – meets day by day. There is no schedule that the ruling party has reported. Yesterday Frigerio showed his political doll and got the first photos with governors. The first to arrive was the peronee Pepo. "Argentina must give a signal for the security of the world and we must all be together," said Governor Chaco. Music for official ears, after several days of permanent rejection. "No one can disagree with the ten points of coincidence raised by the President," said Pepo, who actually went to coordinate flood relief programs, but ended up as the first to open the conversation. However, Peppo also warned: "There are two things I would like to include, which have to do with the current reality of the country: one is the tariff question, and another is the possibility of freezing the layoffs, because it also creates uncertainty ".

Next on the list of visitors was Bordeaux, who is on track to revise his position, judging by the huge score of PASO entrerrianas. "Whenever a dialogue is called, it must be done," Bordeaux said. Socioli, on the other hand, was the first of the presidential candidates to attend the dialogue proposed by Makri. The former opponent in 2015 has already said he is ready to put his experience in the service to find a way out of the economic crisis. Yesterday he arrived with a letter, which was added to the large exchange of letters these days. In it, he asked Macri "that economic policy should be defined by the Argentines, not by multilateral credit agencies"

Another who came out with his letter was Sergio Massa, accused of reproaching: "You are meeting 1245 days today as president and reality shows that you have chosen a bad path." He asked his message to include "some self-criticism" and called for "urgent and urgent" measures (see box).

Among other governors, receipt remains inseparable. The governors of Formosa, Guido Insfran and La Rioja, Sergio Casas, were already critical. To this was added Santiago del Estero, Gerardo Zamora, who demanded consensus, but among opponents: "We need to achieve great national unity from all sectors that disagree with this way of governing Argentina for three years, and ask for an option to re-it take the land, and with Christine inside. " "The nation has taken some measures that are not good and influenced the purchasing power of people," he asked.

"I get the feeling that the conversation started here, because a document prepared by the government began to search for contracts," the governor of Santa Fe, Miguel Lifshitz, who was not completely imprisoned for dialogue, was asked. But the irony was allowed: "The call for dialogue is always good if there is a desire to change the economic plan, it seems great to me." "We must think of a policy that brings solutions to the problem of poverty, employment and inflation," noted the Socialist Governor. In the same line, San Juan Sergio Unagi said the deal should include "active measures to develop activities such as mining and industry, which are employment-generating sectors." In addition, he suggested that the document "is untimely because it interferes with the panorama that is approaching the national elections".

In favor of the government there were some common allies: Neuquen Governor Omar Gutiérrez said it was necessary to achieve "basic agreements in which they are in front of the country, their homeland and the Argentine people." The same was held by Rio Negro, Alberto Veretinek. Salta, Juan Manuel Urtebey, continued to support the distance: "Many are missing among those who have been raised there, but Argentina should begin to show," he said.

Frigio will continue to call governors, while head of government, Horacio Rodriguez Laureta, is in charge of talks with Sergio Massa. The former president is still missing. In their surroundings, they are silent about what they will say about the call. It can be revealed at the presentation of his book sincerely today at the Book Fair. "First we need to see the reaction of the letter. Then I do not exclude that the president meets with all those who intend to lead the country in the future," Frigurio said about the expectations in La Rosada about what would be a CFK move. Some fantasize that they will be isolated negatively. Of course, everyone else should accept the proposal of Makri.