Home / argentina / Shark or dolphin? The drone pilot has a response

Shark or dolphin? The drone pilot has a response 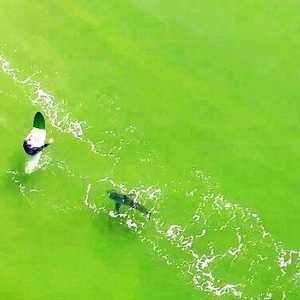 RELAX – that terrible dark shadow you see in the water is probably not a shark.

It's a convincing message from South Cross University professor Brendan Kelaher who found that those on the beach are 135 times more likely to meet a shark dolphin.

And he needs to know.

Professor Kelaher and his team from the National University of Marine Science at the University and the New South Wales Primary Industries Department use drones to track the beaches of the last three years as part of the NSW Shark Strategy.

"Our detailed data suggests it is up to 135 times more likely to be a shark dolphin," he said.

"But if you're worried, it's best to get out of the water."

"As well as contributing to beach safety, our drone program quantifies the various marine wildlife from our beaches," Professor Kelaher said.

"Over the last three years, shots of tremors of over 100 animals, whales feeding bait balls in shallow and incredible speeds between sharks, rays and dolphins are routinely recorded."

"We see potentially dangerous sharks in shallow waters, but our data show that they are much rarer than people will believe," he said.

"Our oceans are full of life and the fact that you can see dolphins regularly only by simply walking on the beach is fantastic.

"We are really happy to have such a beautiful marine environment on our doorstep."

He said the findings confirm that new drone technologies can contribute to the environmental information needed to ensure long-term sustainability of coastal ecosystems.

The results were published online in the 70th edition of the magazine Marine and freshwater research.

If you came across a shark or dolphin in the ocean, send your photos or comments to news@northernstar.com.au