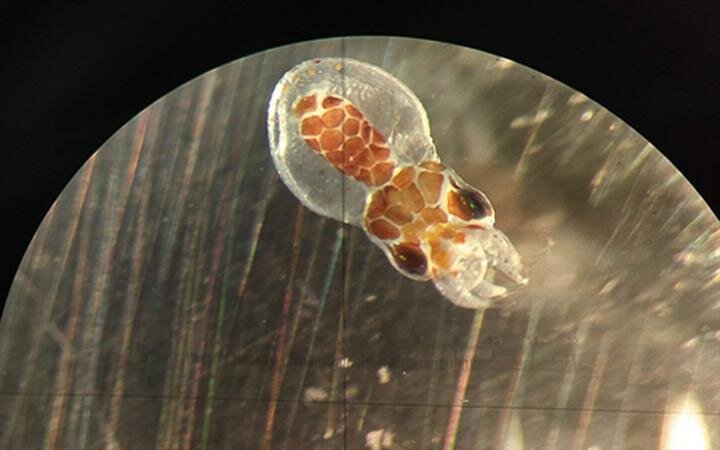 Scientists at the Scripps Institute of Oceanography at the University of California, San Diego, have found that low oxygen levels in seawater can be followed by some marine invertebrates.

These results, published recently in Journal of Experimental Biology, are the first demonstrations that the vision in marine invertebrates is very sensitive to the amount of available oxygen in the water.

Oxygen levels in the ocean are changing globally from natural and human-induced processes. Many marine invertebrates depend on the species to find food, shelter and avoid predators, especially in the early stages of life when many are mountainous. This is especially true for crabs and cephalopods, which are common films for other animals and whose larvae are very migratory in the water column.

Land survey shows that low oxygen levels can affect the species. In fact, people can lose their visual function in low oxygen conditions. For example, pilots flying at high altitudes have visual impairment if the plane fails to supplement the cockpit with additional oxygen. Additionally, health problems such as high blood pressure and strokes, both associated with oxygen loss, may impair vision.

"With all this knowledge of the oxygen that affects the species in terrestrial animals, I wondered if marine animals would react in a similar way," says Lilian McCormick, chief author of a study funded by the National Science Foundation and Doctor of Science. student of Skripps Oceanography.

Her results shocked her. Studying four local marine invertebrates, octopus with two points, tuna and brachyrancus cancer, revealed that the species was reduced by 60-100 percent under low oxygen conditions.

Using larvae collected in the waters outside Scripps, McCormick tested an acute response – a short-term response to reduced oxygen exposure – in the larvae species. She worked with Nicholas Ash, a researcher at the San Diego Department of Psychology, to develop a tuning for such small samples.

"Most of the lab work is focused on solving biomedical issues in the type of mammals," Osh said. "So, it's fun to get out of less traditional model models and apply our techniques to a completely different field."

Put on a phase of a liquid seawater microscope with gradually reduced levels of oxygen, larvae were exposed to light conditions that McCormick could use to extract visual responses. It measures these responses using electrodes associated with larva retina. This technique is called electroretinogram.

"Imagine the device as an ECG eye machine," McCormick said. "Instead of measuring the electrical activity in the heart, we are looking at the part of the eye called the retina."

Once the availability of oxygen began to decrease from well-oxygenated levels, such as on the surface of the ocean, McCormick immediately spotted larvae. This was particularly true in brachyonous crab and squid, which lost almost all of their visions at the lowest tested oxygen states, about 20 percent of surface oxygen levels. The octopuses stayed longer, and the retina responses were reduced only after oxygen was reduced to a certain level, while tuna crusts were rather elastic. It is known that adult tuna cats tolerate low oxygen water.

"I was surprised to see that even within minutes of being exposed to low oxygen, some of these species became virtually blind," McCormick said.

Fortunately, when oxygen levels were restored, most of the samples renewed some visual function, indicating that damage may not last for short-term periods of low oxygen.

McCormick is interested in how this reduced vision can affect animal behavior, especially among those who experience the most dramatic loss of vision. These animals rely on signs of light, and the inability to discover these signs can affect their survival. An example is migration. The larvae of these species migrate vertically, sinking to deep depths during the day and climbing to the surface at night, and use changes in the intensity of light as migration.

In addition, the larvae rely on a vision of capture and avoidance of predators. Squid larvae hunt fast swimming booty, like copepods, and their vision is critical to this. The retinal response rate in squid larvae was slowed down during exposure to low oxygen, suggesting that this visual impairment could hamper the ability of larvae to detect copepods and foods. Loss of the ability to react to changes in the intensity of light – such as the shadow of a predator – or visually see prey can reduce survival in these high-visibility larvae. San Diego's market squid can be particularly sensitive because they place their eggs in low-oxygenated areas as well as the seabed near the canyon near La Jolla.

In the marine environment, oxygen levels change over the daily, seasonal, and seasonal scales. There are also large fluctuations of oxygen with depth. However, these conditions are changing due to climate change under the influence of man, and even pollution. Atmospheric warming changes temperatures in the ocean, which reduces the mixing of well-oxygenated surface waters to deeper waters. In addition, central environments are increasingly losing oxygen in a process called eutrophication, in which excessive nutrients in the water increase the plankton hole and then deplete the available oxygen dissolved in water. This can lead to the dying of fish and other marine animals. Eutrophication is often the result of coastal pollution, such as an outflow from agriculture or from sewage. Oxygen loss is particularly pronounced in areas of naturally low oxygen and upwelling, such as on the coast of California.

These results are based on acute responses, and McCormick is curious how long-term exposure to low oxygen can affect these animals in the wild. Her further work will test the visual behaviors under different oxygen conditions, as well as comparing the results of physiology and studies of behavior to oxygen and light conditions in the ocean over time.

Citing:
Low oxygen levels can temporarily follow marine invertebrates (2019, May 9)
taken on May 9, 2019
from https://phys.org/news/2019-05- oxygen-temporal-marina-invertebrates.html