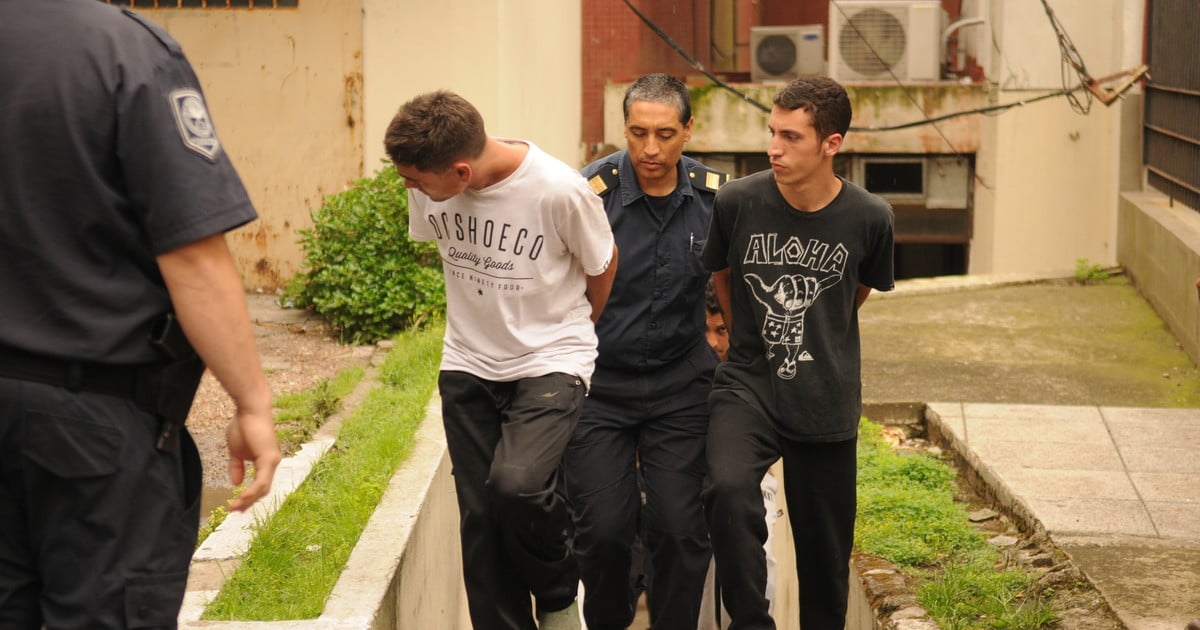 With their heads down, the five young men accused of raping a 14-year-old girl in Miramar's camp, walk along the road to the transfer truck. In recent hours, their social networks were filled with rejection terms, but this Wednesday also had someone to give words of encouragement: family and friends went to support them, chanting "you are innocent." Accused five seven hours in the tribunals "Mar del Plata", where it was decided that they would continue to be detained.

The five young men between the ages of 21 and 23 were transferred in the morning from Alchanaia de Batan to the construction of the courts in Mara de Plata, where they led to prosecutor Florence Salas, who accused them of the crime sexual abuse with a harsh bodily approach. It took several minutes before four in the afternoon that they ended up with a declaration and returned to the 44th Batan prison. "Tomorrow I go, force," "they are innocent, boys", they were cries of relatives that were heard on the door of the court.

"There are many skills to do. Now they are available to the judge. I asked for arrest, nothing more, "the prosecutor simply told reporters when they left the courts without giving details about the detainees' statements.

Despite the secrecy that is handled by the investigation, the version that is being overcome is that two out of five young people would admit they had had sexual intercourse with a girl under 14, but without a context of violence. This version was not officially confirmed.

During the day, the tension in the court building was dominated on Wednesday. This is until he approached the relatives and friends of the boys accused and pointed against the journalists who covered the news. Angry, they said that everything is false: "I want to see you here, when Justice says it's a lie. They are shit," some shouted.

Approximately 30 people, all of them older, arrived after the defendants entered the Mar del Plata courts. They settled on the 7th floor, where some cried and embraced, while others faced the press.

"It's all a lie," the relatives and friends of the defendants shouted angrily, while the statements were concrete. (Photo: Fabian Gastiarena)

"This is what is sold and therefore come," said one of them. And one used an unusual argument to defend defendants: "Those who need to talk with the girl's parents who went out to look at her at dawn after knowing nothing about her"

In the middle of this, and according to the order of the General Internal Audit of the Ministry of Security in Buenos Aires, the police chief Miramar, Deputy Commissioner Andres Caballero, was removed from his duties, since men in his charge acted "slowly" in the first moments of the investigation. "He was supposed to be expelled, but his action in case of camping accelerated his departure," Clarin official source told.

This Tuesday, after the arrest of young people, Investigators hijacked the truck and the carp They were used by Lucas Pitman (21), Emanuel Diaz (23), Thomas Jaime (23), Roberto Costa (21) and Juan Cruz Villalba (23). The youth – among them surfers, saviors and musicians – like the victim, are from Mar del Plata.

The vehicle is white on "Renault Traffic" in which young people moved to the Miramar and blue tent tent, in which researchers believe that a teenager was raped. They were also kidnapped clothing of the defendant.

According to the reconstruction made by the researchers for the event, everything happened early in the morning on January 1, with a full New Year's celebration. The victim arrived a day before the El Durazno camp, which was located on the shore of the sea and a few meters from the access to Miramar, along with his parents, his brother and two other friendly families. All stayed in the area of ​​bungalows, located 150 meters from the main entrance. The place remains open and works normally.

Meanwhile, the five young people camp in the forest area of ​​the property. After a while of toast, the girl's mother noticed his absence, began to look at the rooms and found the worst scene: naked in the blue tent surrounded by men. There, the father and other people called the police and held the young men until the officers arrived to arrest them.

The first medical trials confirmed that the juvenile had genital lesions. After the declaration of the five defendants, it will be the end of the 14-year-old girl, which can happen before the weekend. As prosecutor Salas confirmed, it will be on Thursday or Friday, "soon" after being authorized by the psychologist and guarantor judge, Saul Erradonea.