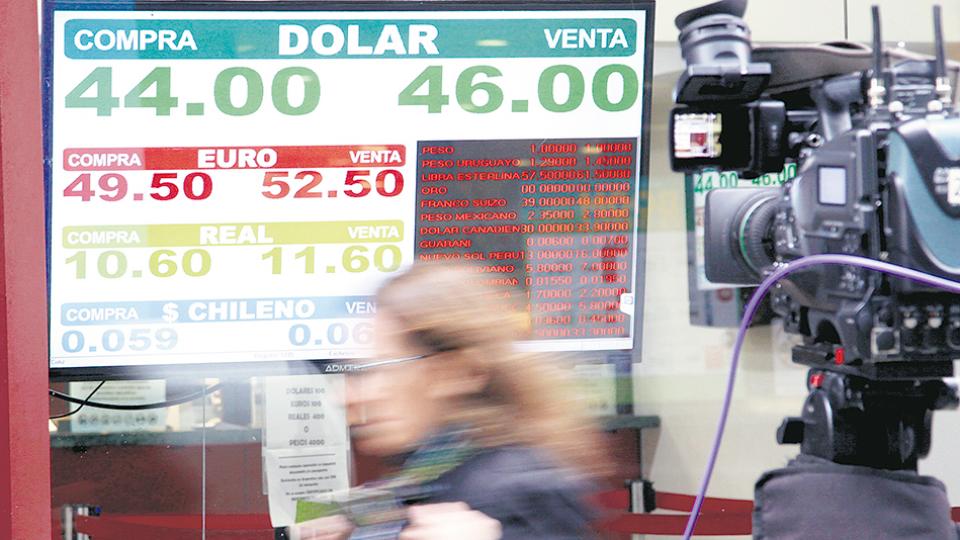 "The corks that the government has are not sufficient to defend themselves if there is a flight." The description, made by a trusted analyst of this paper at the end of the financial day, coincides with the size of the financial and foreign exchange market during the day. The dollar and the country's risk started a day, reflecting official intervention at the end of operations Thursday to calm down the results of the race. But the relief hardly took an hour of government. Until noon, the trend was reversed by the afternoon, the Central Bank itself had to confirm the dollar's rise, awarding the second auction of $ 30 million to the wholesale market at 45.75 pesos per unit, peso with 75 cents above the opening price of day. The same thing happened with Lelić, who offered at the second auction an average salary of 72.65 percent. But even that made the banks recover the deadlines: the negative balance (net withdrawal) was 63 billion pesos, accumulating about 150 billion pesos on Sunday. With all the pressure from the big merchants, the retail price of the new deal was accelerated and closed with record value: the last value of Banco Nación was 51.80 pesos, which is 3 percent above the value of 45, 40 with which the day began. In the banks of the city, the average of the sold dollar on the board is 46.90.

Without Thursday's hysteria, the financial and currency markets more appropriately absorbed the rise of the dollar and rates, while stock market operations seemed to recover a certain peace with a half-turn of the downturn from the previous day. "Now the market is stable, until the new break," said the analyst who had consulted on the implementation of the armistice breach. Neither the acquisition of titles attributed to Anses FGS nor the sale of dollars to public banks have the capacity to face a massive escape of capital, such as that which is alive, also at unusual speed and sustained with comments and articles in international economic magazines that do nothing but predict a financial debacle of the country.

The beginning of the shortcomings in the wholesale foreign exchange market failed to be held until noon. The starting value of the dollar was 44 pesos, 90 cents lower on Thursday. But in less than an hour of work it climbed to 44.40 and around noon, at 45, showing the weight of demand even on those values. The central bank reflected this situation in its first $ 30 million offer, which put (on behalf of the Ministry of Finance) a value of 44.85 pesos. Reducing the war between the banks and the monetary authorities, at that time of the day, also resulted in the fact that although the central bank increased the average rate offered by Lelik to 71.63 percent (more than half the point above the average on Thursday), it was not it is possible for entities to restore total maturities.

These trends were consolidated in the afternoon, with the second central currency auction that sold another 30 million to 45.75 pesos per unit (90 cents above the tender two hours ago), while Lelik noted a new correction from the growth rate, which climbed to 72.65 percent (one point more than the previous one). The result of the day was that the banks withdrew 63 billion pesos of stocks in the day, adding a net withdrawal of nearly 150 billion pesos Sunday.

The central bank should leave in the coming days to recover liquidity, at the risk of the monetary base escaping over the IMF agreement. But in order to do this, you need to raise the rate, and even then you do not have a guarantee of meeting the goal. In the meantime, the dollar follows its route, which is marked by the massive output of capital. The financial perspective is a constant disruption. The impact on the real economy will be a greater recession due to the effect of rates and the new inflation jump due to the new devaluation. As Alfredo Zayat accurately explained, the financial crisis of 2018 brought the IMF back; The second phase was the economic crisis, with recession and inflation. Now the time has come for the political crisis, already in full development.